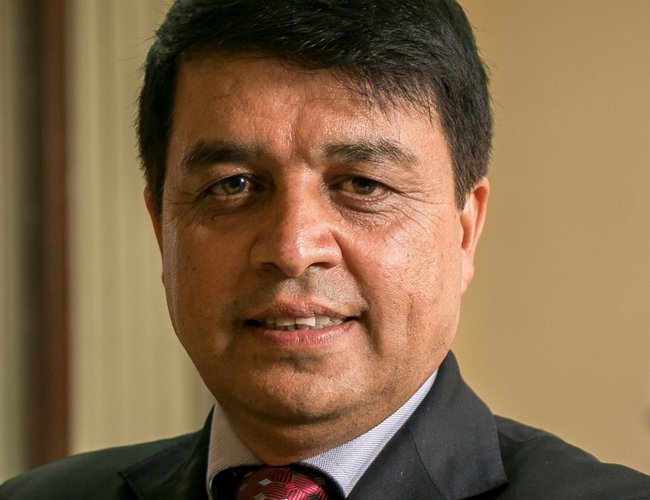 As Chanakya says a successful person starts work by finding satisfactory answers to questions of why he or she is doing it. What might be the results? Will I be successful?

As Chanakya says in his book Arthshastra, Chandra Prasad Dhakal, Chairman of Global IME Bank Ltd, who is also the first senior vice-president of Federation of Nepalese Chamber of Commerce of Industry (FNCCI), knew the answers to these questions before he started the banking venture. Thus, Dhakal has made Global IME Bank, the largest bank, in just a matter of 14 years.

Humble and gentle, Dhakal, who won the elections of FNCCI with a comfortable margin, said that the bank is able to provide dependable and quality services to its customers by modernizing networks following its merger with various other banks and financial institutions. In his message on the occasion of 14th annual ceremony, he said that the bank has a long experience of merger and successful operation after merger.

In a short period of its establishment, the bank has become the largest and strongest bank in Nepal in terms of capital, business, branch/network, as per a media release.

He hoped that the experience gained by the bank will further encourage improving the services. “After the merger and acquisition, bank’s capital has increased along with competitive capacity along with banking activities, human resources and capacity,” said Dhakal.

Chairman Dhakal said that the bank’s credibility and trust has enhanced due to continuation of banking services during COVID-19 pandemic. He also said that the bank is able to help and support enterprises, industrialists and entrepreneurs providing various kinds of concessions and relief, proving the bank as a dependable friend at the time of crisis.

“Our customers will remember us for continuing our business and services at the time of globally terrifying and complex COVID-19 Pandemic. This also proves that out bank is not only for business but a friend at the time of crisis,” said Dhakal. “We will further strengthen our services and our behavior.”

As per the directives of Nepal Rastra Bank, the bank has offered various relief packages extending the period payment of interest and loan, reduction in interest rest to private sector. This shows that the bank can work with private sector side by side at the time of national crisis. We also learn that the crisis can be managed only through unity not division.

The bank’s current paid-up capital is around Rs 19 billion (more than Rs 21 billion after the proposed 14 per cent bonus) and the reserve fund will reach Rs 27.24 billion, a total deposit of Rs 249 billion and a total loan of more than Rs 211 billion.

Similarly, the bank aims to provide access to banking services to all sectors and classes in all seven provinces and 73 districts. It is providing services from about 797 service centers including the representative office.

“Following mergers, Global IME Bank is the largest and the best bank in terms of many indicators. We need to expand our branches in all 77 districts to materialize slogan banks for all,” said CEO Bajracharya.

Global IME Bank Ltd has grown in 14 years of its initial capital. Within a short period of its establishment, the bank is the largest and strong bank expanding its network of branches and increasing its capital.

The bank’s paid capital is now about Rs.19 billion (with proposed 14 percent bonus, it will reach Rs. 27.24 billion and its total deposit is 249 billion and total loan is 211 billion.