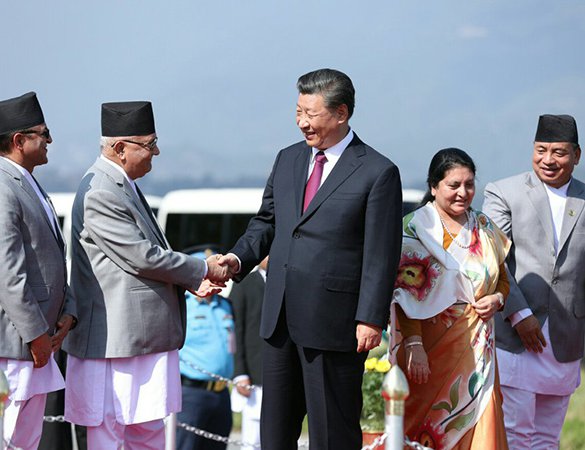 Given its resources, efficiency in carrying out activities and a highly capacitated human resource, China is in a unique position to lead the economic recovery in the post pandemic world. As stated in China’s much publicized White Paper, China is ready to join hands with other countries to address the looming global recession. In May, Chinese President Xi Jinping said that his country would provide USD 2 billion over two years to help other countries respond to the impact of the Covid-19. Nowhere can China’s support be more helpful than in its neighborhood, especially South Asia where countries will most definitely struggle to revive the economy post the pandemic.

The current situation has thus provided China another opportunity to extend its support to Nepal.

The post-pandemic world is certain to be a very different one than the existing with many experts predicting the emergence of China as the de-facto global leader. In this context, China has a huge potential to support Nepal’s economic recovery post the pandemic. This might not only be through economic aid but also through measures like encouraging Nepali tourism and implementing its pledged project. This will not only strengthen Nepal-China ties but also help cement China’s position as a friendly neighbor in the entire South Asian region. To play the role of a true friend, it will be better if China extends its hand of support but at the same time, does not increase ‘aid dependency’ in Nepal as has been the interest of many donors previously.

One of the first areas China can help is in tourism. With the spread of pandemic, the tourism sector has not only experienced a huge slump but now faces the risk of complete collapse. In this context, Chinese support in the tourism sector can be crucial. In the past few years, number of Chinese tourists visiting Nepal has drastically increased with Chinese nationals constituting the second largest group of tourists visiting Nepal. In 2019, for instance, out of the 1.17 million tourists who visited Nepal, 15% or 169,453 were Chinese. In 2018, the figure was 153,602 which was a 46.8% increase from the previous year. In 2020, the government had set a target of bringing in 500,000 Chinese tourists to Nepal before the Covid-19 outbreak. While a 500,000 target might not be feasible given the current context, China can definitely help promote Nepali tourism sector within its borders which can provide a much-needed boost to Nepali economy. This would also provide a huge respite to hotels and restaurants which have been reeling under the pressure of the pandemic. When Chinese President visited Nepal in 2019, the first one to do so since 1996, he had said that he would encourage Chinese tourists to visit Nepal. Xi was quoted saying that “Nepal is the first South Asian country to be designated an approved destination for Chinese tourists”. Now would be the apt time to put Xi’s pledge into action.

Contribution to FDI could be another way the Chinese could support Nepal. When Chinese investors committed to an FDI of USD 8.3 billion in the Investment Summit in 2017, many were skeptical about whether this would translate into action. With Nepal’s economic growth for 2020 and 2021 expected to languish at extremely low levels, now would be the right time for those Chinese investors to prove the naysayers wrong. There is no doubt that Nepal needs to improve the red-tape bureaucracy to welcome foreign companies, but China on its part should particularly look at bringing in some of its manufacturing industries in Nepal with the intent of knowledge and technology transfer. An example of how Chinese FDI has helped economic growth is evident in Africa where it has contributed significantly to economic growth and become a source of job creation in several countries, as companies have established operations, particularly in labor-intensive manufacturing. The World Bank claims that Chinese investment in Africa has had a direct impact on African economy via rising trade, investment aid, and flows and an indirect one via China’s demand for and impact on the prices of global metals and minerals.

There also needs to be a focus on implementing approved projects. The Nepal Investment Board has approved investment for the development of the 164MW Kaligandaki Gorge Hydropower Project in Mustang and Myagdi. The project is being developed by Chinese Yunnan Xinhua Water Conservancy and Hydropower Investment Company. Similarly, in 2018 the government awarded the 762-megawatt Tamor Reservoir Hydropower Project to a Nepali and Chinese joint venture firm, Hydroelectricity Investment and Development Company Ltd (HIDCL) of Nepal and Chinese state-owned Power China Corporation. While construction of these project will take some time, injecting investments for these projects at a situation like this will provide a positive encouragement to the Nepali economy. Not only this, it can also help generate thousands of jobs for Nepalese who have lost job due to the pandemic.

Abijit is a Political Science graduate from University of Delhi and an LLM graduate from ECUPL, China). Nischal is an Economics and Policy Graduate Student at Levy Economics Institute of Bard College, NY, USA)