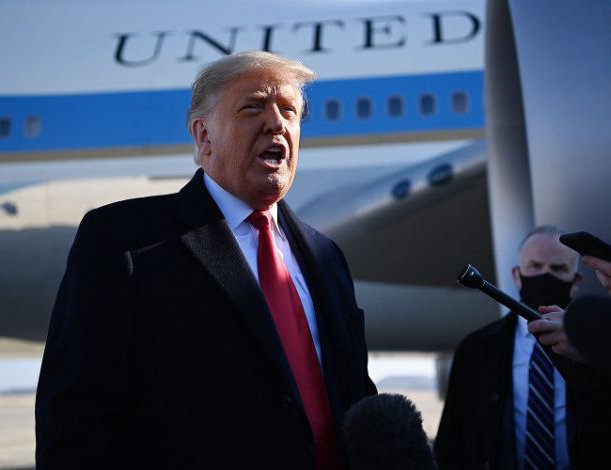 US President Donald Trump has said his speech before last week's deadly Capitol riot, when he urged his supporters to march on Congress, was "totally appropriate".

Mr Trump dismissed as "ridiculous" efforts by Democrats in Congress to impeach him for inciting insurrection.

He leaves office on 20 January, when President-elect Joe Biden is sworn in.

The House of Representatives is expected to vote on an article of impeachment on Wednesday.

He was speaking as he left the White House for a visit to Texas to inspect a section of the border wall with Mexico. It was his first public appearance since the violence at the Capitol, in which five people died and dozens of people were injured, including at least 60 police officers.

What did Mr Trump say in his speech?

During his speech at the rally in Washington on 6 January, Mr Trump repeated his unsubstantiated claims of voter fraud during the 3 November presidential election and urged his supporters to march on Congress.

"We're going to walk down to the Capitol, and we're going to cheer on our brave senators and congressmen and women, and we're probably not going to be cheering so much for some of them, because you'll never take back our country with weakness. You have to show strength," he told the crowd of several thousand supporters.

He said Vice-President Mike Pence should have "the courage to do what he has to do", claiming without foundation that Mr Pence had the constitutional power to overturn the votes which were being formally tallied in Congress that day.

"I know that everyone here will soon be marching over to the Capitol building to peacefully and patriotically make your voices heard," Mr Trump said.

Dozens of people have since been detained in connection with last week's violence. Of the five who lost their lives, one was a police officer and one was a rioter shot dead by police.

Meanwhile, a third US lawmaker has said he has Covid-19 after sheltering with maskless Republicans in a safe room during the events of 6 January.