All 50 US States On Alert For Armed Protests

All 50 US States On Alert For Armed Protests 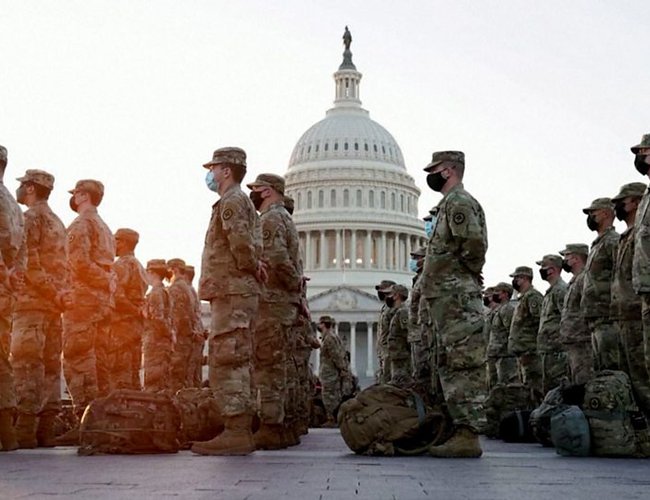 All 50 US states and the District of Columbia (DC) are on alert for possible violent protests this weekend, ahead of President-elect Joe Biden's inauguration on Wednesday.

National Guard troops have been sent to Washington DC, to deter any repeat of last week's deadly riots.

The FBI has warned of possible armed marches by pro-Trump supporters at all 50 state capitols.

In DC, Capitol Police arrested an armed man at a security checkpoint.

Police confirmed on Saturday that a Virginia man had been arrested a day earlier with two handguns and 509 rounds of ammunition, as he tried to access a restricted area near the Capitol in a pick-up truck.

He was carrying a "non-government issued credential", police said.

Responding on Twitter, Representative Don Beyer of Virginia said "the danger is real", and urged people to avoid the Capitol area.

The arrest comes as authorities bolster security in Washington, where many streets - some miles from the Capitol - have been blocked off with concrete barriers and metal fences.

The National Mall, which is usually thronged with thousands of people for inaugurations, has been shut at the request of the Secret Service - the agency charged with protecting the president.

The Biden team had already asked Americans to avoid travelling to the nation's capital for the inauguration because of the Covid-19 pandemic. Local officials said people should watch the event remotely.

Sunday is expected to be a particular focus for protests, after posts on pro-Trump and far-right online networks called for armed demonstrations on that day.

Some militias have told their followers not to attend, however, citing heavy security or claiming the planned events are police traps.

It follows a week in which Donald Trump became the first US president to be impeached twice. He now faces a Senate trial, on a charge of "incitement of insurrection" linked to the storming of the US Capitol by groups of his supporters on 6 January. They did so in a bid to thwart Congress certifying Joe Biden's victory in the presidential election.

Dozens of arrests have been made in relation to the assault on the Capitol building.

Among the latest is a far-right media personality known as Baked Alaska - real name Anthime Joseph Gionet. A criminal complaint says he was arrested in Houston, Texas on Friday and charged with two federal crimes, including violent entry and disorderly conduct on Capitol grounds.