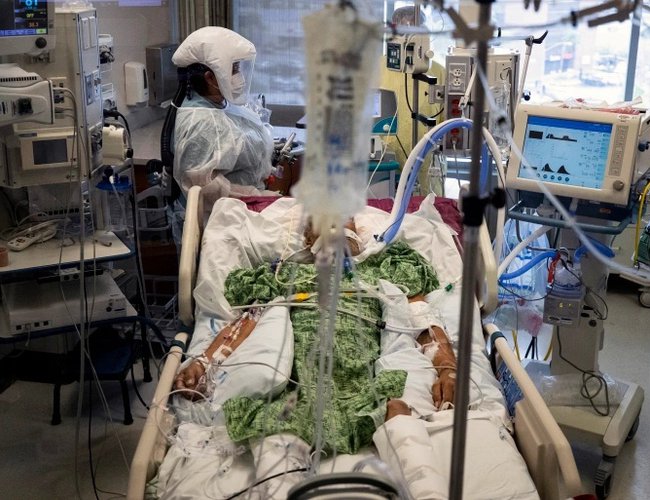 The United States has confirmed more than 25 million cases of coronavirus – the most in the world – as newly inaugurated President Joe Biden’s chief of staff accused Donald Trump’s administration of failing to provide states with a plan to administer much-needed vaccines.

The US accounts for more than a quarter of all global cases, according to data from Johns Hopkins University.

The country is hoping vaccines will help curb the disease, but there are reports of state-level snafus in vaccine distribution, and shortages in some parts of the country.

In an interview on NBC’s Meet the Press on Sunday, Ron Klain said state-level distribution plans for COVID-19 vaccines “did not really exist” under the previous Trump administration, despite the surge in the pandemic during its final months in office.

“The process to distribute the vaccine, particularly outside of nursing homes and hospitals, out into the community as a whole, did not really exist when we came into the White House,”Biden’s chief of staff said.

While the Trump administration’s Operation Warp Speed has aided in the development and manufacturing of vaccines, the vaccine roll-out has lagged and the US missed its target of inoculating 20 million people by the end of 2020.

The US Centers for Disease Control and Prevention (CDC) says just about half of the 41.4 million vaccines that have been distributed to US states have been administered so far.

Top US infectious disease expert Anthony Fauci, who worked on the coronavirus task force under Trump, on Friday said the previous administration had left too much of the responsibility to the states.

That was echoed by Klain on Sunday. “We’ve seen this factor all over the country where millions of doses have been distributed, but only about half have been given out,” he said.

Meanwhile, in an interview on CBS’ “Face the Nation” on Sunday, Dr Deborah Birx, the coordinator of the Trump administration coronavirus task force, said there members of the former president’s White House who “definitely believed that this was a hoax”.

Biden, who has promised a fierce fight against the pandemic, has set a goal of administering 100 million vaccinations within his first 100 days in office – a figure that some have criticised as not ambitious enough.

He also signed a series of executive orders last week, including some that target vaccine distribution, and said his administration would work with state and local governments to establish additional vaccination sites.