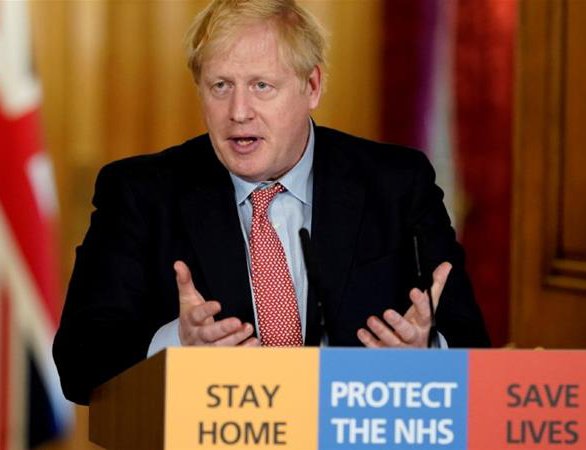 Prime Minister Boris Johnson said he took "full responsibility" for the government's actions, saying: "We truly did everything we could."

"I'm deeply sorry for every life lost," he said.

A total of 100,162 deaths have been recorded in the UK, the first European nation to pass the landmark.

Earlier, figures from the ONS, which are based on death certificates, showed there had been nearly 104,000 deaths since the pandemic began.

The government's daily figures rely on positive tests and are slightly lower.

Why is the UK's death toll so bad?

Mr Johnson told Tuesday's Downing Street news conference that it was "hard to compute the sorrow contained in this grim statistic".

He gave his "deepest condolences" to those who had lost loved ones, including "fathers and mothers, brothers and sisters, sons and daughters, and the many grandparents who've been taken".

The UK is the fifth country to pass 100,000 deaths, coming after the US, Brazil, India and Mexico.

A surge in cases in recent weeks - driven in part by a new, fast-spreading variant of the virus - has left the UK with one of the highest coronavirus death rates globally.

A further 20,089 coronavirus cases were recorded on Tuesday, continuing a downward trend in the number of UK cases seen in recent days. The number of people in hospital remains high, as do the UK's daily death figures.

Mr Johnson said the coronavirus infection rate remained "pretty forbiddingly high" despite lockdown restrictions which have been in place in England since 5 January.

Under the national lockdown, people in England must stay at home and only go out for limited reasons - including for food shopping, exercise, or work if they cannot do so from home. Similar measures are in place across much of Scotland, Wales and Northern Ireland.

Mr Johnson said he would set out more detail in "the next few days and weeks" about "when and how we want to get things open again".

Putin Declares Annexation Of 4 Territories Of Ukraine To Russia By Agencies 11 hours, 59 minutes ago

Abe's State Funeral To Be Held On Tuesday By Agencies 4 days, 12 hours ago