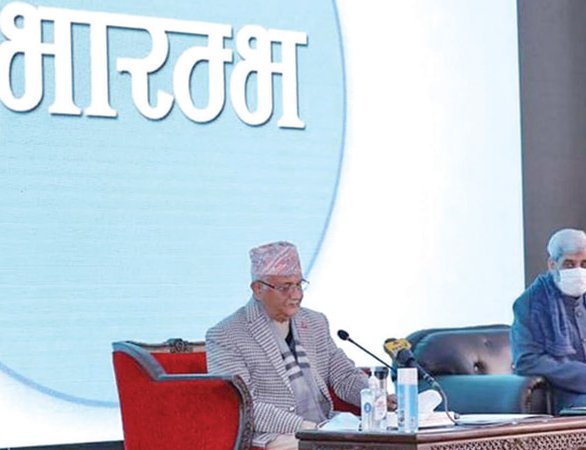 Prime Minister KP Sharma Oli committed to roll out the COVID-19 vaccines to all Nepalis free of cost within three months.

“No one will be deprived of vaccination. It will be administered free of cost. Necessary budget to purchase the essential vaccines has already been arranged,” said PM Oli inaugurating the vaccination drive reports The Rising Nepal,

As the Prime Minister inaugurated the campaign, the vaccines were administered to all the prioritised frontline workers from 62 hospitals of all seven Provinces, 17 hospitals of the Kathmandu Valley and 120 vaccination centres.

Prime Minister Oli took the occasion to thank all those actively contributing to the campaign against COVID-19 in Nepal. He committed to administering vaccine to all Nepalis at the earliest.

The Prime Minister urged people to take precautions against the virus and added that the virus had made the society aware of using medicinal herbs to fight against diseases.

On the occasion, Minister for Health and Population Hridayesh Tripathi informed that 12,000 people were getting vaccinated against the COVID-19 on first day

According to the report , the first phase of the campaign would be continued for 10 days, he said, adding that the second dose of the vaccine would be administered after 28 days.

The vaccine would be administered to 430,000 people under the first phase. Preparations have been made for administering vaccines through 300 vaccination centres in the 77 districts within January 31 reports the daily.

One million doses of vaccines were brought to Nepal from India under its ‘VaccineMaitri’ programme on January 21. Prior to completing the first phase vaccination campaign, the government is looking forward to bring the vaccines needed for the second phase. The government will also be regulating the immunisation process in order to prevent the wastage of the vaccines.

Partly Cloudy In Hilly Areas Of Province 1 And Gandaki Province

There will be partly cloudy in the hilly areas of Province 1 and Gandaki Province and mainly fair in the rest of the country. No significant fall in day time temperature.

European Parliamentarian Delegation: Visit For Cause By NEW SPOTLIGHT ONLINE 3 days, 17 hours ago