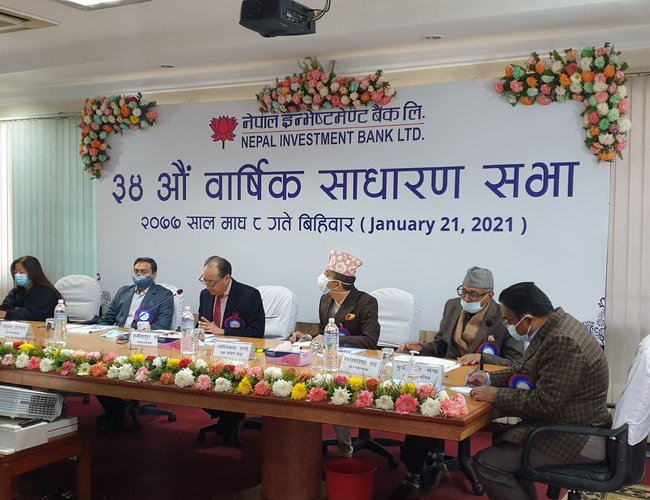 The real test of leadership is not when everything is sailing smooth. Leadership is oftentimes tested during a crisis. The way a leader behaves and acts during a crisis will establish their credentials as a good leader or a poor one.

Very often, the unpredictable nature of crises means that leaders have no time to prepare. It is very much a do or be destroyed situation. Additionally, there’s no telling how long a crisis will take to blow over. The time period can range from a day or two to over a few years.

Honesty and confidence are important things leaders need to display. The quality of leadership of any organization matters at the time of crisis. This is what Nepal Investment Bank has shown by safely navigating COVID-19 crisis and placing the bank on a track of recovery. Chaired by experienced and renowned banker Pande, NIBL is able to achieve progress despite complete lockdown of the country.

Chairman Pande and his family members also got infected with COVID-19. Even as he was hospitalized for a few days, he continued his efforts to minimize the damage to bank’s overall performance giving direction and taking appropriate steps.

Along with other sectors, the nationwide lockdown announced by the government had also disrupted the transaction and day to day activities of the bank for a few weeks. However, NIBL is able to minimize the loss. Nepal Investment Bank Limited (NIBL) has announced a decision to distribute 18.5 % total dividend, composed of 13 % bonus shares and 5.5% cash, on its total paid-up capital.

Successfully concluding its 34th Annual General Meeting (AGM) for the fiscal year 2076-77 on 21st January, 2021 at its head office, Durbar Marg, the bank announced the decision. Chaired by the bank chairman Prithivi Bahadur Pandé, the shareholders were informed in the meeting of the bank’s decision to distribute 18.5 % total dividend.

Taking in to consideration the Pandemic circumstances, the decision was taken to conduct the meeting through a virtual medium.

During the year, NIBL earned an operating profit of NPR 3.51 billion. The net profit of the bank for FY 2076/77 stood at NPR 2.42billion with paid-up capital to reach NPR 14.24 billion. In the FY 2076/77, NIBL’s deposits have increased to NPR 166 billion from the previous year’s total NPR 152 billion. Similarly, the total lending has reached NPR 141 billion compared to NPR 127 billion from the previous year.

NIBL has been catering to its customers from 83 branches, 128 ATMs, 20 extension counters, 10 revenue collection counters and 59 branchless banking counters. The bank, being the recipient of five Bank of the Year awards for exemplary service and business, was accredited with Euromoney awards for “Best Bank 2018” from the international publication - Euromoney. Further, ICRA Nepal (International Credit Rating Agency- Nepal) has given the bank a credit rating of A.

Thanks to its leadership, NIBL has come up with some packages of profit to its shareholders.

Bangladesh Is Ready To Buy Electricity Generated In Nepal: Ambassador Chowdhury By Agencies 1 day, 6 hours ago