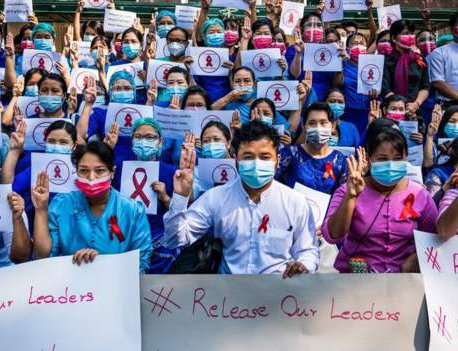 Protests against the military coup in Myanmar are becoming widespread in the country. Authorities are tightening the squeeze on civil disobedience by arresting protesters and demanding an end to the rallies.

In Yangon, Myanmar's biggest city, students and teachers at several universities staged protests on Friday. They showed three-finger gestures, which has become a symbol of resistance against the coup. The protesters said they do not need a dictatorship.

One teacher said, "Our ultimate goal is to regain our democratic government led by Aung San Suu Kyi. We will return to work only then."

Medical workers are also participating in rallies. Local media report doctors and staff at more than 80 hospitals across Myanmar have stopped work to protest against the takeover. The national broadcaster MRTV on Friday reported a military statement that accuses the medical workers of being unethical.

The military is cracking down on the protests. In the central city of Mandalay, local media reported that about 30 protesters were detained on Thursday.

A local civic group says some have died in clashes with soldiers, but police say no one has been injured or killed.

A human rights expert is expressing concern that the military may expand its target of the crackdown.

Phil Robertson, Deputy Asia Director from Human Rights Watch, said, "NGO people and independent journalists, including Burmese, who have worked for international broadcasters have gone into hiding because they have been told that their names are on a list for surveillance and possible arrest. So there is, I think, a deepening crackdown, an increased atmosphere of repression that is going on."

The leaders of Indonesia and Malaysia on Friday called for a special meeting of the foreign ministers of the Association of Southeast Asian Nations. The leaders said they hope the political differences in Myanmar can be resolved through legal means.

127 People Die In Stampede After Soccer Match In Indonesia By Agencies 1 day, 19 hours ago

Putin Declares Annexation Of 4 Territories Of Ukraine To Russia By Agencies 2 days, 19 hours ago