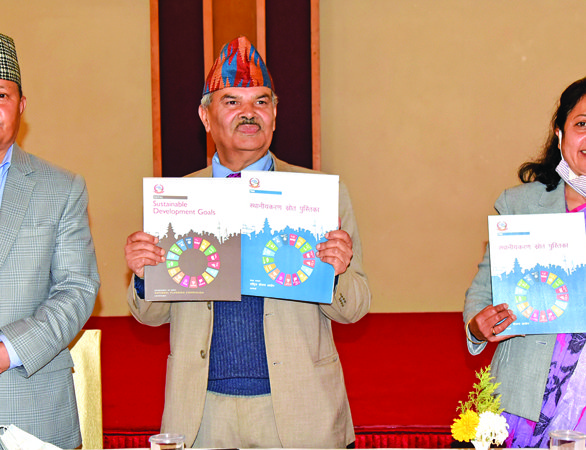 Releasing the report, vice chairman, Dr. Kandel said that the impact of the pandemic was moderate on the economy and development as the economic activities had taken up better than expected. He stated that the NPC was devising a rehabilitation strategy to revive the economy in the post pandemic scenario report The Rising Nepal.

"The pandemic has the potential of not only delaying but effectively reversing the positive trends in most SDGs particularly ending poverty, zero hunger, healthy lives, quality education, decent work and economic growth, reducing inequalities and partnership for sustainable development," concluded the NPC report. There are 17 SDGs to be achieved by 2030.

But real challenge to the implementation of the SDGs and monitoring is data gap. "A big constraint to the development is weak statistical base. We do not have better data-set of the sub-national governments," said Khomraj Koirala, Joint secretary at the NPC.

The daily said there has been a steady decline in levels of poverty nationwide, although regional and ethnic differences continue to exist. Population living below US$1.9 a day is 15 per cent, noted the report.

Although there has been progress in school enrolment at the primary level with 97.2 per cent and ratio of girls to boys and primary completion rate is 89.5 per cent, the achievements are below the expectations.