Against this sombre backdrop, the Nepal chapter of Climate Action Network South Asia (CANSA) and its Delhi-based secretariat met in Kathmandu on 1st February to take stock of climate action in Nepal as well as more generally. The picture is not pretty. 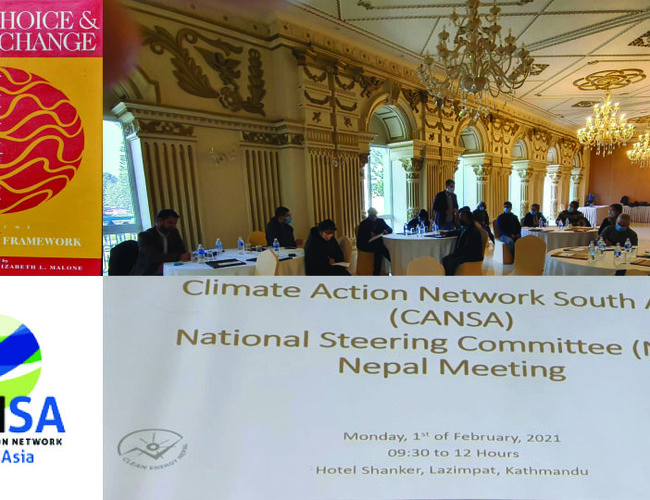 In seeing the Biden administration returning the US to the Paris Accords and the appointment of John Kerry as the US climate czar, is the heaving of a sigh of relief by the global climate change community not premature? There is a distinct danger, in view of the incorrigible wickedness of the climate problem and the bitter politics all proposed solutions are sure to be enmeshed in, that the complacency such a sense of relief might generate within the environmental civic movements will militate against the urgency of meaningful solutions!

While a belated righting of a wrong that should never have happened – and which (with other such unilateralism of the Trump regime) has severely dented America's image as a reliable rules-based player – is welcome, the state of global climate action at the UNFCC bureaucratic level is hardly sufficient to undo the planetary damage that is unfolding. Its measures are insufficient to arrest the inexorable global warming heading to 30C or even 40C, let alone remain limited to even 20C or get us to 1.50C. And the rowdy Trumpian forces who maintain climate change is a "hoax" meant to damage their fossil fuel-addicted economy will politically continue to shackle any Green initiatives the US can take.

Against this sombre backdrop, the Nepal chapter of Climate Action Network South Asia (CANSA) and its Delhi-based secretariat met in Kathmandu on 1st February to take stock of climate action in Nepal as well as more generally. The picture is not pretty. As co-chair of CANSA (my other co-chair is Abid Suleri of SDPI/Pakistan), I had to bring to notice the fact that, since the path-breaking publication "Global Warming in an Unequal World" in 1991 by Anil Agarwal and Sunita Narain, South Asia has lagged behind in creative initiatives of both ideas and actions. Its governments 'lacklustre participation in climate forums almost smack of mere junketeering and its many environmental NGOs only follow Wester donor leads. What Southern environmental NGOs need to do is to put our signature imprint on our collective initiatives and not just rubber-stamp agendas handed down from the North. This was discussed at the last CANSA annual general meeting in Nagarkot; and Nepal did produce its own (rather damning) assessment of the State of Climate Action in Nepal 2018 but other countries have yet to show such independent efforts.

Take two examples, the first being climate migration which has overtones of security paranoia for the Industrialized North which funds such studies in the Global South. We instead suffer from insecure economic migration and political refugee deluge. Compared to their scale and trauma, climate migration (if it is happening at all) is a sideshow drop in the bucket, impossible (as most studies on it admit) to untangle it from economic, political and disaster-related migrations. While the other victims require political action against concrete protagonists (abusive businesses or brutal states), climate "refugees" must file primary case against Mother Nature and then secondarily against nature-destroying industrial capitalism from the 19th Century onwards. This is too tall a task and the unanswered question remains: in light of all the myriad, horrendous problems of governance faced by the Global South, is climate migration even an issue worth the time and effort? 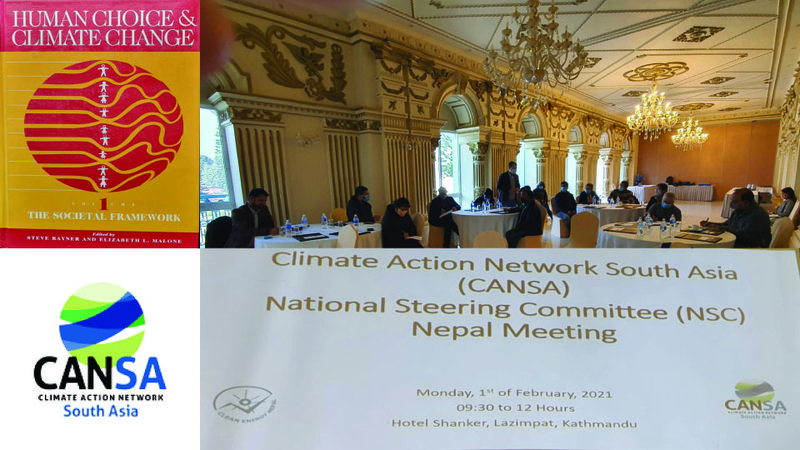 The other example is Nepal's recent submission of its Second Nationally Determined Contribution (NDC2) to reduce CO2 emissions completed at the penultimate moment through INGO funding support in December 2020 while the country was under COVID-19 standstill. Its breath-taking banality can be seen glaringly in four areas. First, NDC1 of October 2016 failed rather dramatically, with the commitments to increase electric vehicles (EVs) on Nepali roads to 20% by 2020. Not only was the actual achievement hovering around near zero in 2020, this government, to add insult to injury, slapped massive taxes on them, thus essentially pricing them out of the market. It also promised to reduce fossil fuel dependency by 50% in 2050 but indications of the last five years since the 2016 commitments are that its consumption has near doubled as has imported coal-generated electricity over nationally produced hydro that is allowed to be spilled and wasted. No review of this failure, let alone lessons learnt, extracted and appropriate corrective measures instituted, was done in NDC2!

Second, with all this actual fossil dependency on the increase, NDC2 promises to increase the "sales" of EV by 25% in 2025 with no plan to replace or phase out petrol and diesel vehicles, or to promote electric ropeways in the hills to prevent "bulldozer terrorism" of landslides from badly constructed roads. Third, in a blatant display of meaningless tokenism, it promises action plan for gender inclusiveness GESI – by2030! What could possibly be preventing Nepal government from coming out with a GESI action plan in a month? It certainly should be less difficult than building two hydropower plants back to back which can be done in this time period!

Finally, the most damning indictment is a sentence at the start of its list of targets. In a blatant display of the lack of any sense of commitment to the urgency of meeting the climate change challenge, it states that Nepal's NDC targets are "conditional upon international support", i.e., we need about $25 billion to do these things but will only spend $3.4 billion ourselves and you international folks better cough up the rest if you want us to do anything meaningful! What a shameless display of fund-raising blackmail to say nothing of a lack of seriousness. Indeed, one hears that core ministries such as those of transport stayed away from these consultations, putting a question mark on the relevance of such an NDC2 document.

If disasters are mostly from social shortcomings, it is the social sciences that should be looking at climate change more seriously. Such an effort happened seriously for the first (and sadly almost last) time a quarter of a century ago, with the US Department of Energy funded and Pacific Northwest National Laboratory conducted 4-volume 1998 study Human Choice and Climate Change. I was one of the advisory board members together with eminent folks such as former US defence secretary and World Bank president Robert McNamara as well as Thomas Schelling who much later in 2005 won the Nobel Prize in economics.

The study described climate change as a "wicked problem", multidisciplinary and exceedingly complex where let alone solutions, there is little agreement on even the definition of the problem by social solidarities such as bureaucratic hierarchism, market individualism or activist civic egalitarianism. All of them arepartly right and partly wrong in their own specific ways. Targets and timetables, however, are too top-down and hierarchic (and inconsiderate of other ways of thinking and defining the problem) to do justice to the plurality of local experiences and adaptive capabilities. As a result, social and institutional limits to global sustainability in climate action will have been reached long before natural/physical limits will have been arrived at.

I remember my long coffee conversations in Oxford with the main investigator of this study, the late Steve Rayner in mid-November 2019. He was worried that the whole climate movement was taking a wrong turn, that average global temperature rise really tells us very little, that we need to worry more about the increase in energy content of the atmosphere to understand extremes such as cloudburst and polar vortex swings. The climate problem, after all, was created by the energy sector but it is the water sector through which humanity is going to feel the impact and where solutions have to be found. But sadly, the water sector has not come up with its definition of the climate problem and what should be done about it.

It is with such qualms that I look at South Asia's climate community that is currently unable to come up with a unique signature South Asian response and where sadly there is an unthinking knee-jerk response to attribute even normal weather and other anomalies to climate change. Where would such a rethinking of climate change policy have to emerge from, including from a water perspective? It is my hunch that the concept of water and energy footprints as well as the nexus approach are going to be foundational to new environmentalism in the first half of the 21st Century.

And that is also where traditional storage/harvesting technologies of water, food and energywill have to be re-visited. They range from quanats, stone water spouts and brushwood dams in the mountains to ponds and baudis in the plains; low water consuming food and their preservation techniques, which are being lost to modern bland 'McDonaldization'; and unique building and clothing styles that either preserve heat or help dissipate them. They have all evolved within our hydro-ecology as technologies with lower water/energy footprints and nexused with other critical societal endeavours. It is in rediscovering them and improving upon them that we may find our salvation in the face of the unfolding climate pollution disaster.

Why Focus On Water Storage? By Dipak Gyawali 5 days ago