Valentine's Day 2021: The significance Of This Day

Valentine's Day 2021: The significance Of This Day 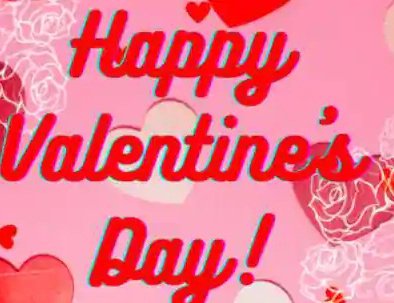 In some parts of the world, Valentine's Day is observed as a day for expressing love between family members and friends, rather than that of romantic couples. Some traditions include leaving lollies and gifts for children and others include acts of appreciation between friends.

Because, social media sites are all about performing your imagined best self, the level of scrutiny on how one celebrates Valentine's Day or what they get from their Valentine is ratcheted up exponentially.

For those who are trying to figure out what to do on Valentine's Day, it is important to know that there are no rules. This is a new era that we live in, and people can celebrate this day of love however they deem fit, even if it is just through self-love.

A nice dinner outing, going to the movies, cooking a fancy meal at home, or hosting Valentine's Day party are all great ways to celebrate this day of love. Whatever you might do, if you have a romantic partner, just make sure that both of you are on the same page to avoid any disappointments.

Love is in the air as the much-awaited will be celebrated by couples of all ages on February 14. While this day is now known for gifts, fancy dinner dates, and an overall celebration of love, the origins of Valentine's Day are far less romantic.

Love is in the air as the much-awaited Valentine's Day will be celebrated by couples of all ages on February 14. While this day is now known for gifts, fancy dinner dates, and an overall celebration of love, the origins of Valentine's Day are far less romantic.

Valentine's Day is named after Saint Valentine, a Catholic clergyman who lived in Rome during the 3rd century B.C. This day contains vestiges of both Christian and ancient Roman traditions, but the history of this day and the story of its patron saint are both shrouded in mystery. There are many stories about Saint Valentine and over time these stories evolved into the legend that we know of today.

The early history of the date February 14

Back in the day, the Romans used to celebrate the feast of Lupercalia from February 13 to February 15, in which men sacrificed a dog and a goat. After this, the hides of the slain animals were used by men to whip women. In fact, young women even lined up to be whipped by men due to their belief that this made them more fertile.

During the celebrations, a matchmaking lottery was also held and men picked out names of women from a box and proceeded to profess their love to these women during the festival. This sometimes also culminated in a marriage.

However, Lupercalia was replaced by St Valentine's Day by the end of the 5th century by Pope Gelasius, and this was part of the reason that led to Valentine's Day being associated with romance as well as the beginning of love.

Valentine's Day: History of its name

Valentine's Day has been named after Saint Valentine, a priest who was believed to have secretly helped Christian couples get married. This was a move against the Roman Emperor Claudius II because the emperor did not allow men to get married.

Saint Valentine was of the view that single men were better and more dedicated soldiers. Saint Valentine did not agree with this ideology and facilitated the weddings of couples in love. Due to this, he was beheaded by the Emperor.

Before the beheading was done, while imprisoned, Valentine's used to care for his fellow prisoners and also his jailor's blind daughter. Legend has it that Valentine cured the girl's blindness and that his final act before being executed was to write her a love message signed 'from your Valentine'. He was then executed on February 14 in the year 270 AD.

It wasn't until more than 200 years later, that February 14 was proclaimed as St Valentine's Day. By this time Rome had become Christian and the Catholic Church was determined to stamp out any remaining paganism. A pagan fertility ritual was held in February each year and the Pope abolished this festival and proclaimed 14 February Saint Valentine's Day, thus establishing this feast day on the Catholic Calendar of Saints.

How Valentine's Day got linked with love?

The poet Geoffrey Chaucer, author of 'The Canterbury Tales', who lived during the Middle Ages was the first to link St Valentine with romantic love. This was the beginning of the tradition of courtly love, a ritual of expressing love and admiration, usually in secret.

This custom spread throughout Europe and stories grew about a High Court of Love where female judges would rule on issues related to love on 14 February each year. Historians believe that these meetings were in fact gatherings where people read love poetry and played games of flirtation.

The older practice of sending love messages gradually developed into people sending special cards expressing their affection. These cards were beautiful creations handmade by the sender and individually designed to show how much they loved the recipient. Cards would usually contain sentimental verse, proclaiming the beauty of the receiver and how much they were loved.

Initially, it was about having one valentine throughout the year. But it later evolved in the 19th century and sparked questions about the sincerity of exchanging pre-printed cards and the sanity of spending exorbitant amounts of money on them.

Valentine's Day and the exchange of valentines were a way that people in the emerging middle class in the 19th century negotiated that complicated relationship between romantic love and the economic reality of marriage.

This story has been published from a wire agency feed without modifications to the text. Only the headline has been changed.