PRITHVI BAHADUR PANDE Committed For Cause

Nepal Investment Bank Ltd chairman Prithvi Bahadur Pande has once again shown his commitment to encourage Nepalese who contribute for the cause of Nepal. 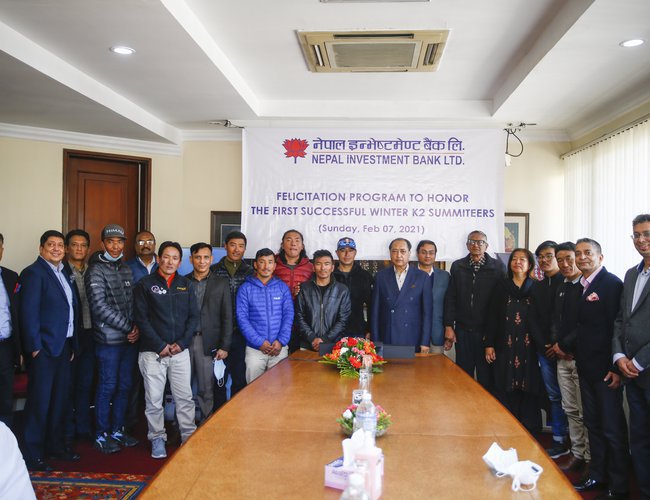 Felicitating and honoring the world’s record holders, the ten members of Mt. K2 Nepali climbing team, Nepal Investment Bank Ltd chairman Prithvi Bahadur Pande has once again shown his commitment to encourage Nepalese who contribute for the cause of Nepal.

Whenever identity and prestige of Nepal is attached, NIBL Chairperson Pande jumps to the forefront. This is the reason NIBL has made enormous financial contributions in preservation of heritage, culture and religious sites of Nepal.

In a similar way, chairperson Pande and NIBL have also been contributing to protect the mountains and persons involved in mountaineering. Felicitating and honoring 10 K2 mountaineers, Pande has shown his interest in promoting such activities.

NIBL has provided big financial support in the reconstruction of Bhimsen Temple in Patan, which was damaged by earthquake.

Continuing its tradition, Nepal Investment Bank Ltd felicitated and honored the ten Nepali climbers, who successfully scaled K2, the second highest mountain in the world, and presented them with a cheque of NPR 10,0000.00 ( Ten lakhs).

In line with CSR strategy, Chairman of Nepal Investment Bank Ltd. (NIBL), Prithvi Bahadur Pandé alongside members of the board and senior managers held a felicitation program in honor of the ten Nepali climbers.

The bank thanked the team for making Nepal proud and hoped that the contribution will act as a motivation for further fantastic conquests.

Nepal Investment Bank Ltd. (NIBL) conducted an event at its head office premises in honor of the Nepalese team that successfully summited K2. A team of 10 Nepalese climbers led by Nirmal Purja set a new world record by becoming the first to reach the summit of K2, the world's second highest mountain, in winter.

With their ‘impossible’ summit of the world’s second-tallest mountain, the ten Nepali climbers sent the national pride surging in the Himalayas. Located in Pakistan and nicknamed “the savage mountain”, K2 is considered the most demanding mountain to conquer and was until now thought to be impossible in winter. Our Nepali climbers achieved that feat on the 16th of January 2021 17:00 local time (12:00 GMT).

Offering cash rewards and facilitating all the brave successful Nepali mountaineers, NIBL and its chairman Pande have shown that the pride of nation is very much a matter of love for them.

NIBL has been catering to its customers from 83 branches, 128 ATMs, 20 extension counters, 10 revenue collection counters and 59 branchless banking counters. The bank, being the recipient of five Banks of the Year awards for exemplary service and business, was accredited with Euromoney awards for “Best Bank 2018” from the international publication - Euromoney. Further, ICRA Nepal (International Credit Rating Agency- Nepal) has given the bank a credit rating of A.