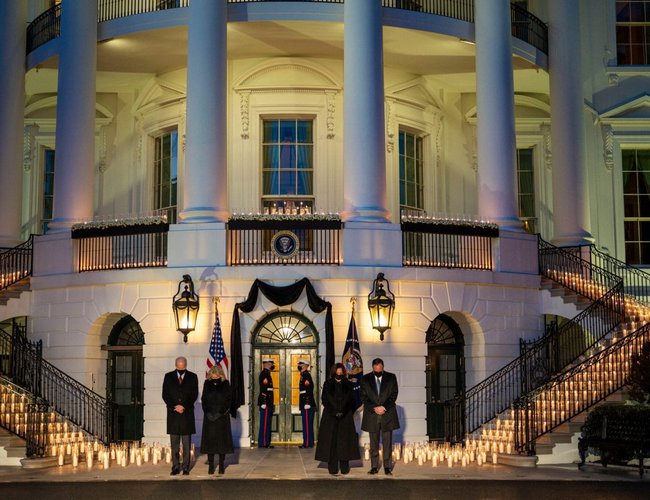 President Joe Biden addressed the nation as the US marks 500,000 deaths from Covid, the most for any country in the world.

"As a nation, we can't accept such a cruel fate. We have to resist becoming numb to the sorrow," he said.

The president and vice-president, and their spouses, then observed a moment of silence outside the White House during a candle-lighting ceremony.

More than 28.1 million Americans have been infected - another global record.

President Biden ordered all flags on federal property to be lowered to half mast for the next five days.

The number of Covid-19 deaths in the United States has surpassed half a million.

According to the tally by Johns Hopkins University, 500,159 people infected with the coronavirus had died in the US as of 8 am on Tuesday, Japan Time.

One hundred thousand of them died since mid-January.

Thanksgiving, Christmas, and New Year holidays triggered spikes in the number of new infections in America. In January, daily new cases exceeded 200,000, and the number of deaths in a day surpassed 4,000.

New infections are now on the decline. But the Centers for Disease Control and Prevention says predictions of various research institutions suggest that tens of thousands of people could die by mid-March.

More than 44 million people had received at least one vaccine inoculation as of Monday. Over 19 million people, or about 6 percent of the population, had completed the two-dose course.

However, many experts say the vaccination program has not reached a level that can have a significant impact on the situation.