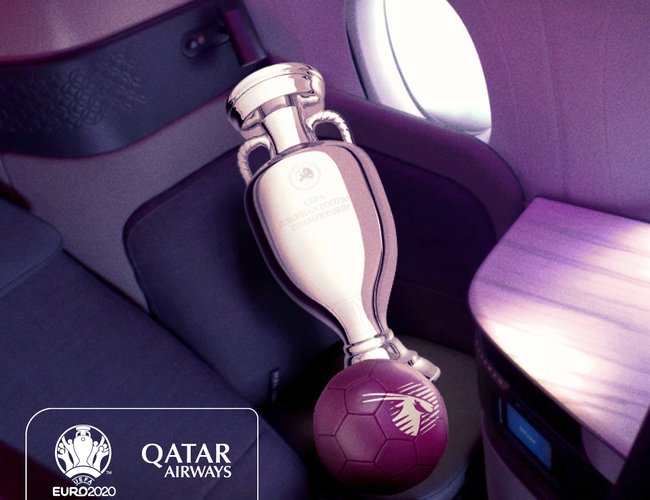 Qatar Airways is proud to announce that it will join The Union of European Football Associations (UEFA) as partner of the UEFA EURO 2020™, with the national carrier of the State of Qatar set to be the Official Airline of the tournament taking place from 11 June – 11 July 2021.

The 16th edition of the flagship UEFA Championship will see the 24-team tournament celebrated across 12 host cities including Amsterdam, Baku, Bilbao, Bucharest, Budapest, Copenhagen, Dublin, Glasgow, London, Munich, Rome and St. Petersburg. Wembley Stadium will be set to host the final in London on 11 July, 2021. Qatar Airways will serve all the host cities either directly or through airline partners. Additionally, the Qatar Airways brand will feature prominently across all digital platforms and stadiums set to host the 51 matches during the course of the summer tournament.

Qatar Airways Group Chief Executive, His Excellency Mr. Akbar Al Baker, said: “Qatar Airways is pleased to partner with UEFA to connect players, fans and officials across the globe through our world-class service. The power of sport to unite people is unrivalled, and this partnership with UEFA EURO 2020™ is an excellent opportunity for us to witness the very best in European football. Furthermore, this alliance illustrates our commitment to Europe, and accentuates our growing sporting partnership portfolio.”

UEFA Director of Marketing, Guy-Laurent Epstein, added: “We are delighted to welcome Qatar Airways on board as an Official Partner of UEFA EURO 2020™. Like sport, travel unites us. Now more than ever, next summer represents the ideal opportunity for us to celebrate the excitement that the competition will bring.”

The sponsorship of the UEFA EURO 2020™ strengthens Qatar Airways’ presence in the world of sport; with the likes of FIFA, CONMEBOL, Paris Saint-Germain, AS Roma, Boca Juniors, FC Bayern München, K.A.S. Eupen and Al Sadd SC well placed in the carrier’s global football sponsorship portfolio, further representing its alignment with the national vision of Qatar.

Qatar Airways recently became the first global airline in the world to achieve the prestigious 5-Star COVID-19 Airline Safety Rating by international air transport rating organisation, Skytrax. This follows HIA’s recent success as the first airport in the Middle East and Asia to be awarded a Skytrax 5-Star COVID-19 Airport Safety Rating. These recognitions provides assurance to passengers across the world that airline health and safety standards are subject to the highest possible standards of professional, independent scrutiny and assessment. For full details of all the measures that have been implemented onboard and in HIA, please visit qatarairways.com/safety.

The national carrier of the State of Qatar continues to rebuild its network, which currently stands at over 130 destinations. With more frequencies being added to key hubs, Qatar Airways offers unrivalled connectivity to passengers, making it easy for them to change their travel dates or destination if they need to.

A multiple award-winning airline, Qatar Airways was named ‘World’s Best Airline’ by the 2019 World Airline Awards, managed by Skytrax. It was also named ‘Best Airline in the Middle East’, ‘World’s Best Business Class’, and ‘Best Business Class Seat’, in recognition of its ground-breaking Business Class experience, Qsuite. The Qsuite seat layout is a 1-2-1 configuration, providing passengers with the most spacious, fully private, comfortable and social distanced Business Class product in the sky. Qsuite is available on flights to more than 45 destinations including Johannesburg, Kuala Lumpur, London and Singapore. It is the only airline to have been awarded the coveted ‘Skytrax Airline of the Year’ title, which is recognised as the pinnacle of excellence in the airline industry, five times.

Today Is Republic Day, President And Prime Minister Call To Strengthen Republic
May 29, 2022
Weather Forecast: Light To Moderate Reain In Kathmandu And Pokhara
May 29, 2022
COVID-19 Update: Nepal Confirms 5 New Cases And 15 Recoveries
May 28, 2022
India Has Greatly Contributed To Nepal’s Development: Minister Karki
May 28, 2022
Charge’d Affaires Of The Embassy Of India Namgya C. Khampa Inaugurated School In Lomanthang
May 28, 2022

Jazeera Airlines To Operate First Flight To GIBA On May 16 By NEW SPOTLIGHT ONLINE 2 weeks, 4 days ago

Nagarkot Is Famously Known For Its Loveliness, Amazing View And laid-back Feeling By Fanny Jonckeau 2 months ago