Since the establishment of diplomatic relations in 1956, Japan has remained a reliable friend supporting Nepal’s development process 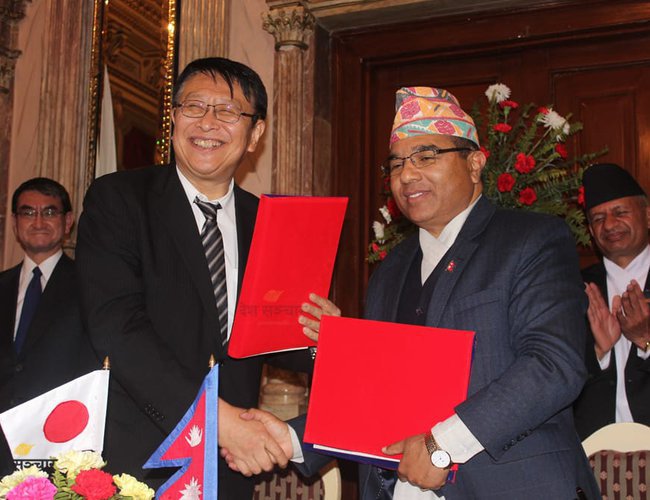 “Japan and Nepal can both contribute to world peace and prosperity by deepening our good, long-lasting friendship further. Japan would like to continue supporting Nepal in economic and technical cooperation, investment, and preservation of cultural heritage for the future generations,” writes Masamichi Saigo, outgoing Japanese ambassador to Nepal in his message.

From first Japanese ambassador to Nepal to current ambassador Masamichi Saigo, their policy statements towards Nepal have remained the same. As Japan celebrated the Emperor’s Birthday on February 23rd, 2021 limiting it online due to COVID-19, the relations between Nepal and Japan have strengthened further.

Japan has been providing technical and financial support to Nepal to build infrastructure like road, hydropower, agriculture, health and other sectors, including the transfer of technology. Along with the state to state relations, there is a strong bond between people to people binding the two countries.

“The high-level exchanges between Japan and Nepal, and people-to-people exchanges in various fields, have contributed to our long-lasting friendship. Early last year, there was a visit by NAKAYAMA Norihiro, then Parliamentary Vice-Minister for Foreign Affairs to Kathmandu. It was after President Bidya Devi Bhandari’s visit to Tokyo in October 2019, the President attended the Ceremonies of the Accession to the Throne of His Majesty the Emperor and a summit meeting with ABE Shinzo, the then Prime Minister of Japan, where they discussed the bilateral relationship between our two countries,” said ambassador.

“I would like to take this opportunity to express my sincere appreciation for all of your kindness and friendship during my stay in Nepal for 2 years and 9 months. Upon leaving, I would like to convey my very best wishes for your good health and happiness.”

Nepalese side has also highly appreciated Japan’s sincere efforts to develop its relations with Nepal and rest of Asia and the world with increased economic cooperation aimed towards a peaceful world order and expressed its gratitude for the friendly assistance being rendered by Japan and for their continued interest in broadening the area of cooperation in Nepal’s development currently being envisaged.

“We appreciate that Nepal has always extended its valuable support to Japan as a friendly nation in various international fora as well as support for our efforts for UNSC reform. We hope Nepal will continue supporting us in the UNSC reform process,” said Mrs. Hitomi Sato, Senior Regional Coordinator, Southwest Asia Division of Ministry of Foreign Affairs of Japan. “Since 1956 when Japan and Nepal established diplomatic relations, both countries have maintained traditionally cordial relations through people-to-people exchange of all levels and cultural exchanges.”

The people to people relationship between the two countries is further strengthening with the exchange of visits. There are about 95,000 Nepalis living in Japan. Many of them are students or technical trainees who are studying the Japanese language, learning skills or techniques, and working.

Similarly, individual Japanese citizens have been immensely contributing to uplift the life of people providing support in health and education system.

Recently, ambassador of Japan to Nepal Saigo Masamichi awarded the Foreign Minister’s Commendation to Dr. Narato Kenjiro for his contributions to support medical services in Nepal.

Dr. Narato is an experienced Japanese family doctor who has been working for the community-based medical services in Hokkaido, Japan. He visited Nepal in 2005 as a Member of the NGO Japan Overseas Christian Medical Cooperative (JOCS) and started working at Chaurjahari village in West Rukum District.

At that time Chaurjahari had a population of approximately 5,000 and the hospital had only about 30 beds. With Dr. Narato’s continuous efforts, the hospital now has 60 beds and is able to provide services to 65,000 patients per year.

After his retirement from JOCS in 2011, Dr. Narato works with a Japanese NGO, DOSANKO Community Health International as its representative in Nepal. He actively has been involved in introducing public health programs, fund-raising for the medical sector, and educating medical and healthcare professionals.

He contributed immediately after the Gorkha Earthquake in Nepal in 2015, and still supports the education of children who became orphans by the earthquake.

On February 27th, 2019, Dr. Narato attended a ceremony to lay a cornerstone for the construction of an emergency department building at Chaurjahari Hospital, which was funded under the Grant Assistance for Grassroots Human Security Projects (GGP) of the Japanese Government, for the Human Development and Community Services, a local NGO that runs the hospital.

Dr. Narato’s contribution has been significant in promoting mutual understanding between Japan and Nepal, and his generous support of medical and health professionals as well as students of both countries is highly appreciated.

In his remarks at the online ceremony, Ambassador Saigo praised Dr. Narato’s long-term contribution to Nepali people’s health and his great contribution to our bilateral relations.

From big highway to community level support in health and other areas, Japan has proven itself as an all-weather friend of Nepal.

“People in Japan associate Nepal with more or less two or three things. First and foremost is the Himalayas landscape. Second, many Japanese know Hindu gods and Buddhism both are worshiped in Nepal and that spiritual root has commonalities with the spiritual root Japan has had. So Nepal and Japan are bound by spirituality. There have been long-term commitments from Japan in terms of developing infrastructures, water facilities, education, health and others,” said Professor Tomohiko TANIGUCHI, who works in the Graduate School of SDM, Keio University, was also a Special Advisor to the Cabinet of Prime Minister Shinzo Abe.