Political instability, intra-party feud and persistingin power to personal ambitions have been the precedence when Nepal should be moving forward to build the nations and the state. 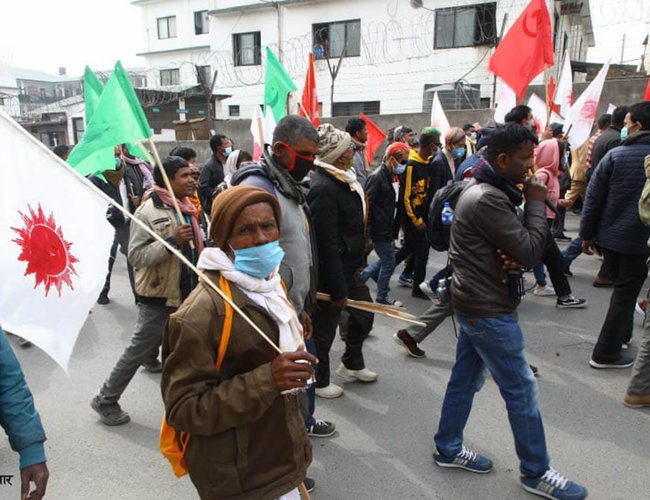 As the country attempts a “re-track” onto functional state building, it is important to reinstate national priorities and revisit the vision of political order and state capacity. The constitution of Nepal had envisioned certain functions derailed due to recent political variability. Therefore, it is now time to ask political and institutional leaders to remember their envisioned roles and responsibilities, and tame monopoly of their power. The future of stability is, moving ahead with three things that are important to re-consider: National order and state building, strengthening national and federal institutions and an applicable election.

State building is one of the most important issues for Nepal because weak or failed governments and constitutional issues are the source of numerous thoughtful glitches from poverty to the economic impact post COVID-19 pandemic to trafficking to terrorism. We recognize a lot about state building but there is enormous covenant we do not know, particularly about how to make political parties more democratic and transfer power to build stronger institutions. The authority knows how to appoint and allocatepossessions across to the ones that support the one in power, but not for the well-functioning of public institutions that require certain habits of mind and operate in complex ways that resist being moved.

Political instability, intra-party feud and persistingin power to personal ambitions have been the precedence when Nepal should be moving forward to build the nations and the state. There are six extensive archetypes swaying the political converse: national identity, working with a federal setup, inclusiveness, democratizing the institutions, religious freedom and use of resources for economic enhancement as well as future instability and procured money from various means like tax.The incorrect modalities could direct via whichever course, or turn out to be a mishmash of both prohibiting and permitting eminences.

The process of formulating the constitution from 2008 to 2015 hoistedargumentative amongst diverse groups particularly the Madhesis, Janajatis, and Tharus who did not stand for the constitution. The amendments in the constitution still remains as the posture of the Madhesi based political parties particularly the Janata Samajbadi Party (JSP). The JSP is being considered to be more persuasive. Populations are seen in the streets with “Raja Aau Desh Bachau” claiming that politics of restriction is constraining the people’s aspirations. The constitution has time and again been criticized for being inadequate in managing the whole enchilada.

The recent political dilemma leading to instability is just one example of unprofessional conduct and mismanagement of political authority for national order and nation building. Elections and parliamentary procedures for transforming the power to another political party will not adequately answer and should not just remain as a response.

It is arguable that one of the sources of instability is the deficiencies in constitutional mechanism is the lack to address all the Nepalese emotional status. But politics and through political parties is what addresses the political discourse as state building is a creation of new government institutions while strengthening the old ones.

Nation-building is arranging a national identity with the purpose to unite the people within Nepal so that She persists politically stable and viable in the long stretch. In this scope, the nation building method and progression is far from actuality. The political parties must find the questions of instability and answers by the people.

Institutional ambiguity is caused when institutional goals are unclear contradictory and poorly specified as may be the case in Nepal’s current transition. Politicization of institutions, financial or political correlation and bribery are just three illustrations because institutions at all three tier of governanceneed strengthening as institutions form, get established, grow and change and are in constant process of developing systems, structures and the environment needed to reach their goals that have an impact. Institutional strengthening is an area of capacity and policy strengthening that looks at the different organizational functions often represented by Federal and Provincial governments. National Structures, Constitutional bodies, Ministries and Departmentsshould involve on organizational principles, minimum standards, best practices, business processes, references, and tools deemed important for effective, efficient, and sustainable organizations.

Weak where provincial government does not have control and failed federal system will be more harmful and the cause of instability. The need for institutional building was more needed after the promulgation of the 2015 constitution with three tier system of governance though the problem existed after the restoration of democracy in 1990. The politicization of institutions and office bearers was the real cause behind, while professionalization and specialization should have been the answer.

Public institution long existed uptight with snags of numerous forms but founding of an appropriate public institution is the requisite, such as a trustworthy professional law and enforcement force, uninterrupted intelligence agencies for national remunerations, uncorrupted bureaucrats, non-politicized courts, proficient constitutional bodies like the Commission for the Investigation of Abuse and Authority (CIAA),Department of Money Laundering Investigation and functioning education and health services and a strong specialized and dedicated civil service.

What we know and often pretend that we do not know nor do we easily transport, is about transferring power with political will for an effective functioning of public institutions in techniques that will consent something of perpetual improvement to the citizens. These are imperative curricula, predominantly as Nepal grapples with accountability subsequently with major alteration in the constitution. The requirement of strengthening national and federal institutions has suddenly risen with the current political upheaval that was necessary and crucial for national security.

Election is an important ingredient of any democracy and has been the primary mechanism to showcase democratic feeling fromoppressive means.

The fulfillment of an electoral term is an indicator to measure the success of elections therefore two things must be assured. First, elections are inclusive, free and fair and easily accessible and approachable to exercise his/herelectoral rights. Secondly, more importantly in Nepal case, completion of electoral terms to assure political stability.

As 2017 electoral term was not able to accomplish the desired goals that the nation was looking forth for, it is important that leaders think that the next election does not result in a similar unstable conclusion. For that the current political frustrations that is visible in different platforms should come as the political party’s political manifesto like the constitution amendments and the argument of the major alteration in the new political system. The election in Nepal now must be an opportunity of the lost years and a step for stability with hopefulness unlike the current government of the Nepal Communist Party, which landed as the basis of unpredictability.

In the post-Cold War era, state building has been difficult to achieve for many countries across the globe. Some countries have transitioned into challenging the potential of state functions and capacity, and have moved towards higher levels of development. Others are still in a state of transition and must not forget national vision and priorities.

The people of Nepal have troubled by political instability fir decades. On the flip side is well versed on what now is precise and truthful for Nepal and the Nepalese.

The major alteration was on no occasion an intuitive formula, and state building and institutional strengthening was always its obligatory prerequisite.Weak Nepal will be the cause for internal disturbances and a source for South Asia’s most serious problems.

Basnyat is a Strategic Analyst and a retired Major General, Nepali Army