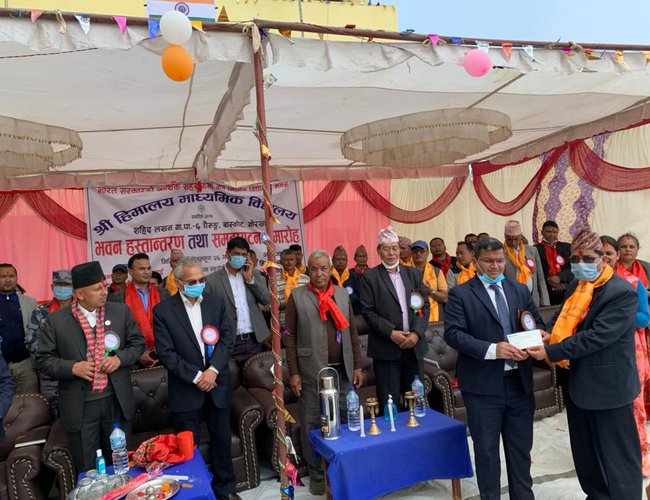 Constructed with the Government of India’s financial assistance of NRs. 43.31 Million, District Coordination Committee, Gorkha and School Management Committee and local representatives were also present during the program.

The new school building has been built under ‘Nepal-Bharat Development Cooperation’ and has three floors and consists of 18 classrooms, a science lab, one room each for administration, teachers and principal, and separate sanitation facilities for girls and boys. The project was taken up as a High Impact Community Development Project (HICDPs)earlier called Small Development Projects, under an Agreement between the Government of India and the Government of Nepal. The project was implemented by District Coordination Committee, Gorkha.

Since 2003, India has taken up over 520 HICDPs in Nepal and has completed 446 projects, of which 50 are in Province 4, including 7 in the Gorkha District. 4 Government of India funded projects are under various stages of completion/implementation in Province-4. In addition to the above, the Embassy of India has gifted 12 ambulances to various health posts and NGOs in Gorkha District.

Under reconstruction grant assistance of the Government of India to Nepal, a total of 71 educational institutions are being built across eight districts of Nepal affected by the 2015 earthquake. Out of these, 7 schools are in Gorkha and three schools have been completed and inaugurated by Foreign Secretary of India H.E. Harsh VardhanShringla on 27th November 2020. Work on the remaining four schools is ongoing. India is also reconstructing 30 earthquake affected hospitals in Gorkha. Shree Himalaya Secondary School was established in 1960and upgraded subsequently in 2010 to Secondary School. It has about250 students, and more than 60% of them are girls. The newly built infrastructure of the School is expected to boost the learning environment for students.

The project is a reflection of India’s development partnership with Nepal and complements the effort of the Government of Nepal in augmenting infrastructure in the field of education.

European Parliamentarian Delegation: Visit For Cause By NEW SPOTLIGHT ONLINE 5 days, 6 hours ago