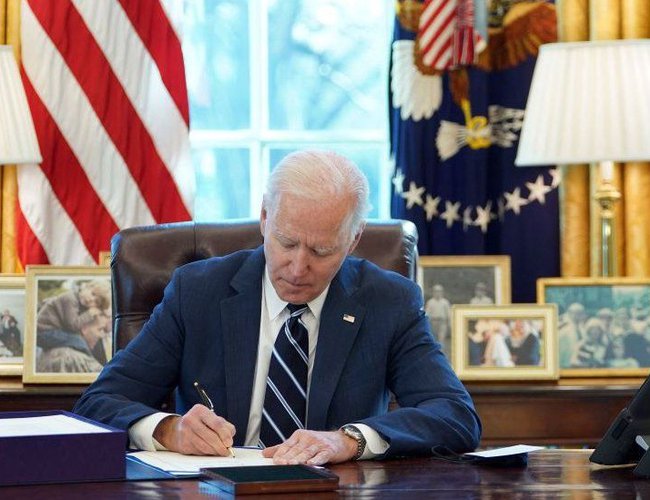 President in the national address will say all US adults will be eligible for COVID vaccine no later than May 1.

President Joe Biden, riding high on a significant legislative victory in the US Congress, signed a $1.9 trillion COVID-19 relief bill at the White House on Thursday, marking one year of the coronavirus pandemic in the United States.

“This historic legislation is about rebuilding the backbone of this country,” Biden said in the Oval Office before signing the bill.

The new law provides for the distribution of $1,400 in direct payments to 160 million US citizens, among other provisions, to help defray costs during the pandemic and stimulate the economy. The US Treasury Department will begin sending out those cheques as soon as the weekend, a White House spokesman said.

The Democratic president plans to deliver a prime-time speech on Thursday night commemorating losses from COVID-19 while expressing hope for the future as vaccinations increase.

Biden will announce that he is directing states to make all US adults eligible for a coronavirus vaccine no later than May 1, according to administration officials who briefed reporters at the White House.

The president will say that there is a good chance Americans will be able to safely gather in small groups by July 4, the US’s Independence Day holiday.

Biden is also expected to stress that the “fight is far from over”. But he’ll say the nation will be in a “far better place” by July 4 if Americans wear masks, follow public health guidelines and get vaccinated when it is their turn.

Biden is expected to announce the deployment of an additional 4,000 active-duty troops to help with vaccinations and the launch of a web site that will allow Americans to find out where they can get vaccinated, the senior officials said

In the past year, 530,000 people have died from COVID-19 in the US, one-fifth of all deaths worldwide from the virus. Now, with one out of 10 Americans fully vaccinated, infections and hospitalizations have been declining.

Biden said on Wednesday he would use his 8pm EST (01:00 GMT) address to discuss “what we’ve been through as a nation this past year”.

“But more importantly, I’m going to talk about what comes next. I’m going to launch the next phase of the COVID response and explain what we will do as a government and what we will ask of the American people,” Biden said.

Biden secured an early legislative victory this week as the Democratic-led Congress passed his $1.9 trillion pandemic-related stimulus bill, which his administration plans to highlight in coming weeks before pushing more of his campaign-trail “Build Back Better” plan.

The president is expected to warn Americans who are weary of pandemic restrictions not to revert to normal behavior prematurely. He has urged continued mask-wearing, social distancing and good hygiene, and he has discouraged cities and states from loosening their guidelines on large gatherings even as more localities relax restrictions.

Top White House COVID-19 advisers and US lawmakers are echoing his hopeful tone.

“There is light at the end of the tunnel,” Dr Anthony Fauci, Biden’s chief medical adviser, told NBC News on Thursday.

“By the time we get into the mid to late summer, early fall, we’re going to start seeing a big, big difference,” Fauci said.

Following tonight’s speech, the White House is planning a series of events to promote the idea that the US has reached a turning point in the pandemic with a “health is here” communications effort, according to Press Secretary Jen Psaki.

Biden will travel to the Philadelphia suburbs on Tuesday and Atlanta on Friday, Psaki told reporters at the White House. Other members of the administration will appear next week in the US cities of Las Vegas, Denver, and Albuquerque.

The president and administration officials will talk about what’s in the $1.9 trillion package the president signed and how it will help struggling Americans, Psaki said.

As of Wednesday, nearly 128 million doses of coronavirus vaccines from the three authorised US providers had been distributed and nearly 96 million shots administered, government data showed.

Biden had campaigned for president in 2020 on a promise to curb the pandemic more effectively than his Republican predecessor Donald Trump.

Trump downplayed the crisis in its early stages and eschewed mask-wearing, while repeatedly predicting the virus would soon disappear even as his administration pushed to speed up vaccine development.

Trump and former first lady Melania Trump did not appear in a new public service announcement released on Thursday encouraging COVID-19 vaccinations and featuring all the other living former US presidents and their spouses.