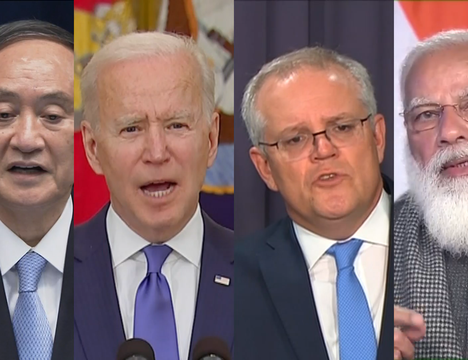 The leaders of Japan, the United States, Australia and India have set out a cooperation plan following their first so-called Quad summit.

A joint statement released after the talks covers a range of issues, including the coronavirus pandemic and climate change.

It says the four countries will work in tandem with multilateral organizations, including the World Health Organization and COVAX Facility, to strengthen equitable vaccine access for the Indo-Pacific.

The leaders of the four countries say they recognize climate change as a global priority, and will work to strengthen the actions of all nations in line with the Paris Agreement.

They also agreed to start cooperating on the critical technologies of the future.

They plan to set up three working groups. One will aim to implement safe and effective vaccine distribution. The others aim to facilitate cooperation on international standards and innovative technologies, and strengthen climate action.

The leaders say they will work to meet any challenges to the rules-based maritime order in the East and South China seas.

They reaffirmed their commitment to the complete denuclearization of North Korea in accordance with United Nation Security Council resolutions.

They also confirmed the need to immediately resolve the issue of North Korea's abduction of Japanese nationals.

The statement says the four countries' foreign ministers will meet at least once a year, and that the leaders will hold an in-person summit by the end of 2021.

Russian Forces Claims Mariupol Steel Plant is Under Their Control By Agencies 2 days, 23 hours ago

COVID-19 Kills Over One Million In US By Agencies 5 days, 23 hours ago