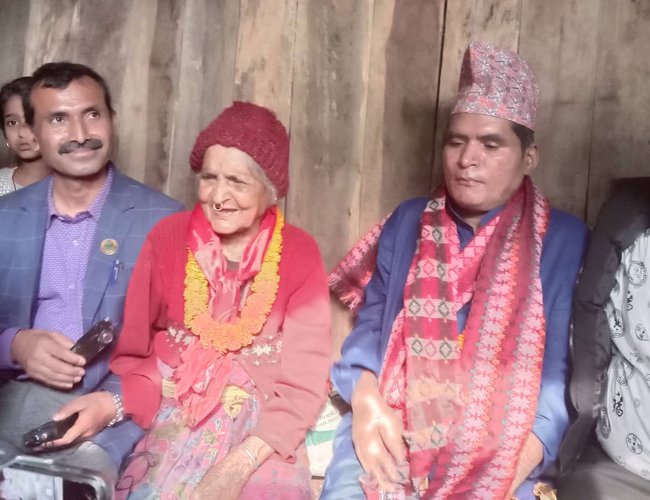 After being released from 40 years-long jail life in India, Durga Prasad Timsina has arrived at his home, Mai Municipality-10 of Ilam this afternoon after 40 years.

He was released on Saturday from Dum Dum Correctional Home of Kolkata, India.

His release was possible after the division bench of Justice at Kolkata High Court Thottathil B Nair Radhakrishnan and Anirudra Roy had issued an order for Timsina’s release.

He met his mother who is 85 year's old while arriving at his home.

According to reporting of Chandrakala Bhandari of RSS, Timsina, originally from Mai Municipality-10 of Ilam, arrived at Kakadvitta, Jhapa after being released from four-decade-long jail life in India.

The 61-year-old had been lodged in various jails including the Dum Dum Correctional Home in India without trial for 40 years.

The division bench of Justice at Kolkata High Court Thottathil B Nair Radhakrishnan and Anirudra Roy had issued an order for Timsina’s release.

Timsina, who arrived at Kakadvitta at 9:15 am today along with his close kin and well-wishers via roadway, gushed, “I can’t wait to meet my mother!” He received a warm welcome from the representatives of the Bishwa Sewa Bistar, a rescue organization, media persons and relatives.

In a press conference organized at Kadakvitta today, Timsina said that he served a torturous jail term in Indian prisons despite being innocent.

The long jail term seems to have taken a physical and mental toll on him as he looks too fragile. He speaks less and seems to be lost at thoughts.

According to Prakash Chandra Timsina, the freed prisoner’ brother, the Kolkata High Court issued an order for the release of Timsina on the ground of mental health and has asked to appraise the court about his health condition every six months. The final verdict on Timsina’s case was, however, awaited.

During the press conference, Timsina recalled his parents and siblings’ names. His father’s name is Champakhar and his mother’s name is Dhanmaya. His brothers are named Kedar and Dharmananda while his only sister is Pabitra.

His father and second eldest brother Kedar are no more while his mother, youngest brother and sister were eagerly waiting for him at his native home.

Durga Prasad’s nickname is Deepak. At the age of 19, he had travelled to Manglabare in the western part of the Ilam district to sell locally produced mustard. Thereafter he set out for Darjeeling in India in prospects of employment.

During the 1980s, the Gurkhaland Movement was reaching a crescendo. Having heard nothing from Deepak, his family assumed that he might have died during the uprising.

Prakash Chandra shared, “We assumed that he might have died in the uprising after there was not a word from him and about him. We came to learn about him being alive and doing his times in Indian prisons for the past 40 years through the Bengal Radio Club.”

In 2013, the family had received a letter sent by Deepak Jaishi who had been claiming that he was Durga Prasad, but the family had a trust issue over the authenticity of the letter and thought that it was sent by someone else to make the family puzzle. He identified himself as Deepak Jaishi in the correction home.

Jaishi's colleague Radheshyam Das from Medinipur of West Bengal was the person who first informed the public about the status and real identity of Durga Prasad. The family is thankful to Das and the Radio Club for their role in taking him out of the jail.

Durga Prasad had been accused of involving in the murder of the spouse of the house owner in Darjeeling where he had been taking shelter. It is learnt that a false case was registered in the police against him and the 'victim family' did not follow up the case once. No trial was made and he was finally taken to the Dum Dum.

The family was informed about his condition with the help of Vishwa Sewa Vistar, an organisation that helps in the search for missing people. Organisation representative Indra Basnet had contacted the Bengal Radio Club before talking to Prakash Chandra.

Durga Prasad's father had died when he was seven years old and his mother Dhanamaya had lost one hand in the accident in the past.

He seemed tired upon arrival at Kakarvita due to his night travel on a bus and just exuded a smile and spoke little with the media. He was dressed in a white 'kamij' and grey trousers. As his brother said, they would reach home today itself.

Nepali Cricketer Sandip Lamichhane To Surrender On Thursday In The Presence Of His Attorney Saroj Ghimire By NEW SPOTLIGHT ONLINE 1 day, 10 hours ago