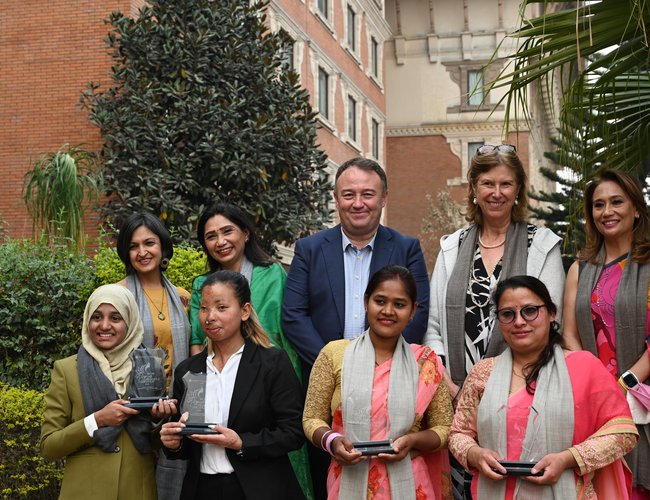 A panel of jury nominated the winners in February 2020, however, due to pandemic the event was withheld, keeping into consideration the guests' safety. Ensuring the continuation of 2020, the event was held amidst a small gathering at the hotel in line with the theme #ChooseToChallenge.

Belmaya Nepali has achieved more than she could ever have imagined; from being born into a poor Dalit family to becoming a popular documentary filmmaker. The credit for her popularity goes to her first short film: Educate Our Daughters, a p ersonal documentary on the importance of education for girls. It won the Short Film Competition at the UK Asian Film Festival 2019. The sixth and youngest child, Belmaya was orphaned at the age of nine. She missed her early schooling and ended up in a girl’s home in Pokhara. She was introduced to a camera at the age of 14 and participated in two photo exhibitions in British Council during the nine months photography project.

Unfortunately, her camera was taken away by family and she did not get chance to use it for the next seven years. At 21, she got the opportunity to enroll in documentary film making training. And that training changed her life. She made the film, Educate Our Daughters in 2016 and it was screened at the Kathmandu International Mountain Film Festival (KIMFF) in 2017. Her second short film, Rowing Against the Flow, on the boatwomen of Pokhara for Thomson Reuters Foundation was also selected for KIMFF in 2018. She has participated in photo exhibitions at the British Council in Nepal and the Royal College of Art in London. Her work was included in the book, My World, My View. Belmaya who was married at the age of 19, has a seven year old daughter. She was one among the many motivational women to share her experience at the 2018 and 2019 WOW Festival. She is also the Co-Director and the subject of Sue Carpenter’s feature documentary, I Am Belmaya which follows her inspiring journey into filmmaking. The film was shown at KIMFF 2019.

In 1992, when Sunita Danuwar was 14, she was kidnapped and trafficked into sex work. Rescued after four years in a brothel, she banded with other survivors to found Shakti Samuha. Under her leadership, Shakti Samuha has expanded its services to provide repatriation assistance, legal aid, vocational and life skill training, livelihood support, job placement services, and psychosocial counseling to more than 20,000 people in some of the poorest communities across 13 districts in Nepal. Sunita has worked tirelessly to prevent human trafficking in poor and rural Nepali communities, travelling to villages to raise awareness and creating plays depicting human trafficking. She recently published her autobiography, Ashuko Shakti (The Power of Tears), to elevate self-esteem among survivors and empower them to overcome social stigma when discussing their experiences. From 2009 to 2011, Sunita headed the Alliance Against Trafficking of Women and Children in Nepal, a national network of NGOs working to raise strong and collective voices against human trafficking, and served as a board member of the Global Alliance Against Traffic in Women, a global anti-trafficking network. Since 2014, Sunita has served as a survivor representative on the National Committee on Controlling Human Trafficking. In each of her positions, Sunita dedicated herself to giving a voice to trafficking survivors and elevating their perspectives.

Migrated to Dang from Rukum, Rita Manushi Sunuwar’s life is not a simple story to be told. Born and brought up in the rural area of Rukum, she was highly influenced by the Maoist struggle for the equal and just country. Rukum being the center place of Maoist insurgency then, she also had joined the Maoist rebellion force at the tender age while studying in standard six. She had experienced many faces of war as she was part of the war from very young age. She was even married inside Maoist camp. Now divorced, Rita remembers the past as the time when she had also dreamed of doing some milestone for the improvement and development of the nation. At present, she owns her own agricultural enterprise and is proud on the success she has attained so far by it. She is running her farm for six years by taking 15 ropani land in Lamatar. She has provided job to several women. Being inspired by her, the other women have also started the same business. Now, she is leading the team and they are running the business in a total of 110 ropani land. She now opines that though mission for her involvement in the Maoist insurgency didn’t get its expected result, she is trying her best to improve the situation of the community by prospering in agricultural sector.

Sangita Magar has not only braved an acid attack but fought to change the law and raise awareness. In 2015, Sangita’s life changed forever; she was a 16 year old preparing for her SLC examination. While returning home after her tuitions, a 20 year old boy from her neighbourhood attacked her with acid. She ran home to her mother, screaming in pain and was rushed to the hospital. The doctors managed to save her life but not her face; despite many surgical procedures, full recovery was not possible. Later, she even challenged the country’s law on acid and burn violence and persuaded the Supreme Court to order that survivors receive immediate financial support from the government to cover the treatment expenses. The provision came into effect on August 17, 2018 as part of the new civil and criminal code. Previously under Nepali law, the Government didn't provide financial support for treatment to acid attack survivors, nor was any compensation provided. Sangita said that it was very difficult to cover the costs, with surgery alone costing US$300-$400, and medicines being very expensive. In June 2017, Sangita and her friend Seema became the two plaintiffs in a public interest case that challenged Nepal's laws on acid and burn violence. As a result, the Supreme Court ordered that victims should get immediate financial support from the Government to cover treatment. The Court also increased the penalty for committing acid attacks from three years to ten years imprisonment. These changes came into effect on August 17, 2018 as part of a new civil and criminal code. After the verdict, Sangita has been receiving discounts on medical treatments, and hospitals now provide free treatments to acid survivors immediately after attacks. Today, Sangita has been reaching out to acid attack survivors and their families for counselling while actively fighting for justice. She has become a role model for many victims like herself. Sangita is also lobbying with the Health Ministry to create a separate facility for acid burn patients so that they get specialised care even after being discharged from the hospital. Today, Sangita works in Kumari Bank.

Sabitra Bhandari has created a new record of having scored the highest number of international goals ever by any Nepali women footballer. In the match between Nepal and the Maldives at the 13th South Asian Games at Pokhara Stadium, Sabitra scored two goals in the 16th and 20th minute to break the record of former captain Anu Lama who had scored 35 international goals. With those two goals, she has scored a total of 37 international goals for Nepal. Recently, National team striker Sabitra alone scored a dozen goals as leaders Armed Police Force Club (APF) demolished Chaudandigadhi Municipality 22-0 in the National Women’s Football League. Earlier, she had scored 35 goals in Kyrgyzstan to equalise the goal number of Anu Lama. At club level, Sabitra plays for APF Club. Further, she became the best women striker of south Asia at the age of 20.

Most inspiring women of 2021 In 2019, at the age of 15, Muskan became the victim of an acid attack for rejecting a boy’s advances. She suffered severe burns on her face, chest, and hands. Her recovery was painful and continues to this day. Despite this, Muskan turned a tragedy into an opportunity to bring about change in Nepal. Facing threats and social pressure, Muskan lobbied for stronger laws and punishments for acid attacks. She met with Prime Minister K.P. Oli who called for a new law to be drafted for acid attacks, and issued an ordinance punishing perpetrators and regulating the sale of chemicals. Muskan’s leadership was crucial in bringing about change. 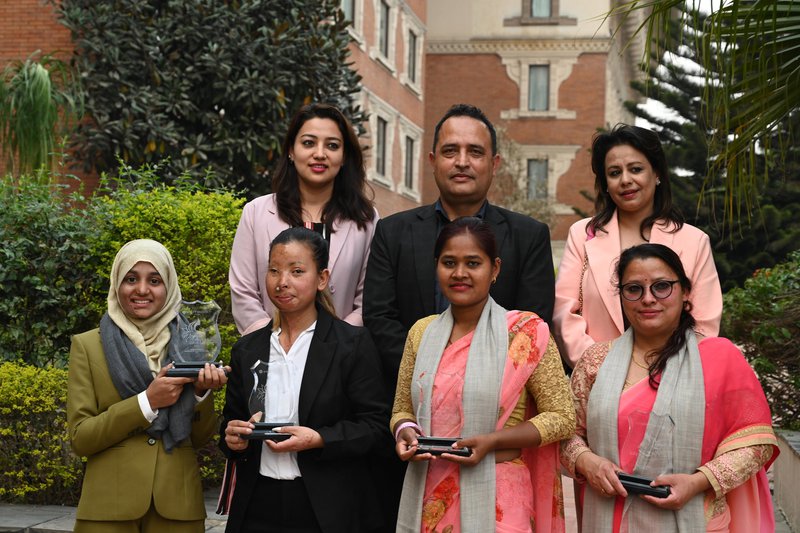 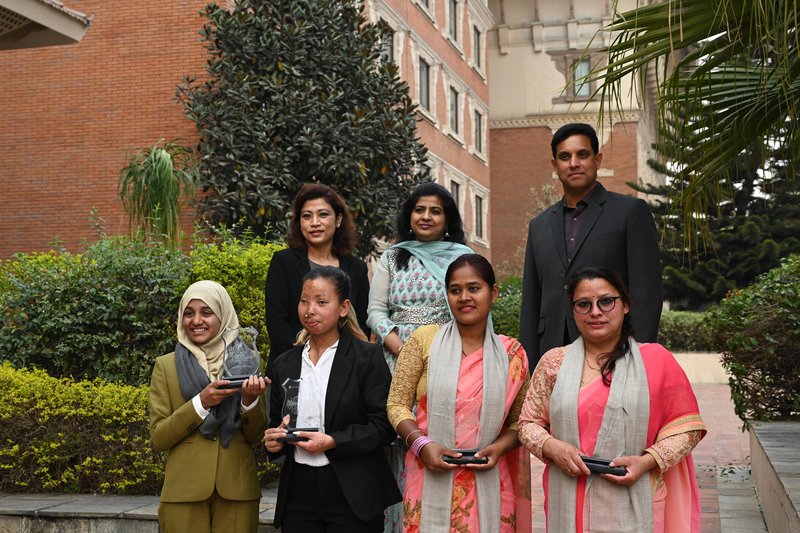