PM Oli Is In No Mood To Withdraw The Decision

PM Oli Is In No Mood To Withdraw The Decision 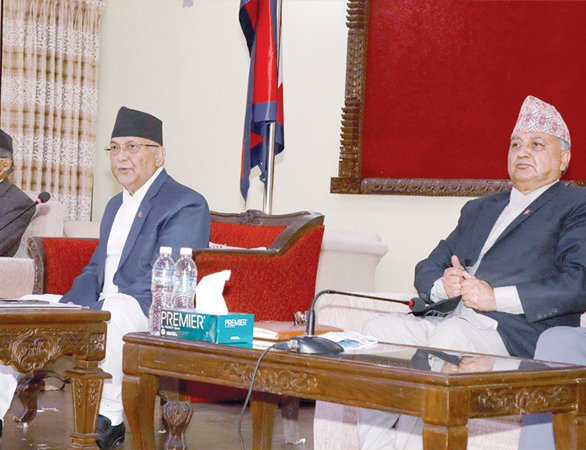 Prime Minister and chairman of the ruling CPN-UML KP Sharma Oli said on Friday that it was impossible to withdraw the decisions taken by the party on March 12 and thereafter reports The Rising Nepal.

Addressing the CPN-UML’s Parliamentary Party meeting held at Baluwatar today, chairman Oli said there was no chance of backtracking the decisions of March 12, said Chief Whip of the UML Bishal Bhattarai quoting the Prime Minister.

PM Oli said since the decision to appoint 23 former Maoist leaders as central committee members was made in accordance with the party’s statute, there was no possibility of withdrawing the decision, said Bhattarai.

During the meeting, chairman Oli also stated that the party would not hold talks with any faction and group of the party. “There exists no faction in the CPN-UML. There is only one party. We will only accept individual criticisms but not the factional one,” said Prime Minister Oli.

The meeting decided to convene the parliamentary party meeting regularly, he added.

Likewise, Chief Whip Bhattarai said since the clarifications submitted by Madhav Kumar Nepal and Bhim Rawal were found negative. However, Bhusal and Surendra Pandey are yet to furnish their clarifications.