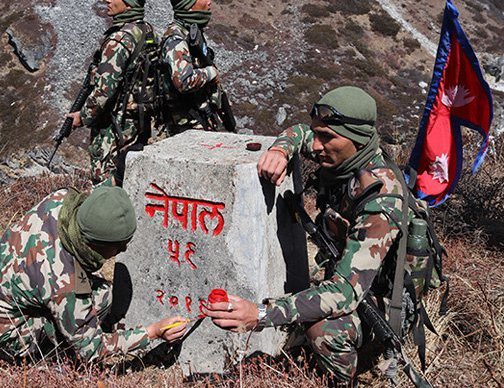 The Nepali Army has been conducting this operation every year to ensure the safety of the locals, check land encroachment and upgrade pillars.

At the border point of Lapche, Bigu Rural Municipality – 1, which sprawls up to 90 kilometres, there are seven pillars that draw the line between Nepali and Chinese land. Built in 1962 and 2006, these pillars have been monitored by one of Nepali Army’s battalions stationed in Dolakha.

Dolakha, the nearest Himalayan district from Kathmandu, borders Ramechhap in the west, Sindhupalchowk in the south and the neighbouring China in the east and the north.

While mountainous terrains, and rivers act as borders separating China from Nepal, boundary pillars have also been erected in the checkpoints of Dolakha.

In the process, the army officials cleared columns that were covered with vines and bushes and also repainted letters and numbers, which had faded over time.

According to Anil KC, Lieutenant Colonel of the Dolakha Battalion, a team of 30 army personnel was deployed to carry out the work dubbed as Operation Himal Darshan.

“The operation was carried out from March 15 to April 3. The army officials have also collected the measurements of the pillars for future references,” he added.

There are seven boundary pillars numbered from 55 to 61 in the Lapche area, out of which number 55 and 60 are in dilapidated condition. “These two pillars were buried underground as a result of landslide,” said KC.