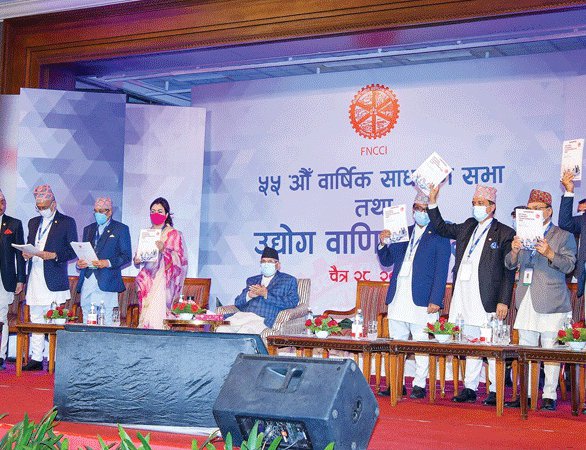 The Federation of Nepalese Chambers of Commerce and Industry (FNCCI) has announced its 10 year vision ‘National Economic Transformation-2030’.

According to National Economic Transformation-2030 (NET2030), they aim of expanding Nepal’s economy to USD 100 billion within next ten years reports The Rising Nepal.

Prime Minister KP Sharma Oli launched the paper on the occasion of 55th annual general assembly of the FNCCI Day-2021.

'Based on the three vision goals, the NET 2030 has identified 19 key focus areas and 100 initiatives.

Efforts have been made to define the roadmap to extend and integrate the past and present work of the FNCCI and the government'.

According to daily, FNCCI president Shekhar Golchha said that the National Economic Transformation 2030 is an effort to drive forward the economic transformation in the country through active multi-stakeholder participation and cooperation and a highly engaged private sector.

Of this, 108 billion USD will come from the private sector. Currently, the country's economy is worth USD 34 billion.

Senior vice-president of FNCCI Chandra Prasad Dhakal said that increasing investment in the infrastructure sector would help in economic development and cut spending in unproductive sectors.

He said that one or two year’s of hard work is not enough to transform Nepal into a prosperous nation, which requires a decade-long vision, clear planning and effective implementation.

He said that this document would be a milestone for economic transformation and prosperous Nepal.