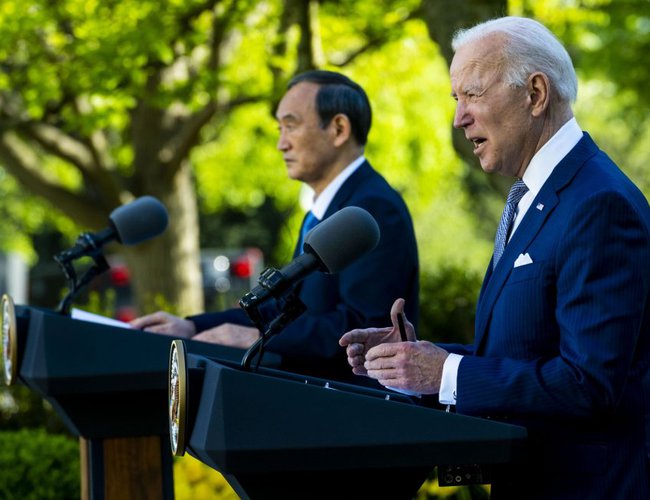 The leaders of Japan and the United States have reaffirmed the importance of peace and stability in the Taiwan Strait in a joint statement issued after the summit reports NHK.

Japanese Prime Minister Suga Yoshihide and US President Joe Biden have wrapped up a summit in Washington on Friday. The two leaders agreed to cooperate on the challenges posed by China.

At a news conference following their summit meeting, Biden said "Japan and the United States are two strong democracies in the region. We're committed, we're committed in defending and advancing our shared values, including human rights and the rule of law. "

Biden also said "We're going to work together to prove that democracies can still compete and win in the 21st century. We can deliver for our people and the face of a rapidly changing world."

Suga said " The Japan-United States alliance has been a cornerstone of peace, stability and prosperity in the Indo-Pacific region and around the world. And it is now becoming more important than ever, due to the current regional situation and the tough security environment."

Suga also said "Based on our common understanding and shared vision, we were able to exchange honest opinions about a wide range of issues during today's talks."

It was Biden's first face-to-face meeting with a foreign leader since taking office reports NHK.

They reaffirmed the importance of peace and stability in the Taiwan Strait, and their commitment to a free and open Indo-Pacific.

They also agreed to cooperate on issues including North Korea and the East and South China seas.

Suga said he explained his determination to hold the Tokyo Olympics and Paralympics this summer, and gained Biden's support

COVID-19 Kills Over One Million In US By Agencies 5 days, 19 hours ago