State Of Emergency Will Not Impact Games: IOC

State Of Emergency Will Not Impact Games: IOC 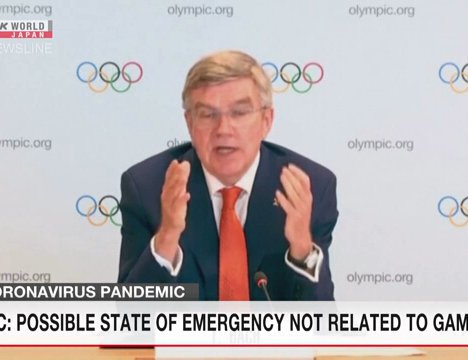 International Olympic Committee President Thomas Bach says a potential state of emergency that could be imposed on Tokyo will not have a direct impact on the Tokyo Games.

The Japanese government is considering declaring a state of emergency in Tokyo and three other prefectures to curb a new spike of coronavirus cases. It plans to make a formal decision on Friday after consulting specialists.

Bach spoke at a news conference after an IOC Executive Board meeting held behind closed doors on Wednesday.

Bach said "We understand that this would be a proactive measure for the 'Golden Week' holiday, with which the government is aiming to prevent the spread of infection." He stressed the potential state of emergency is related to the upcoming holidays, and not to the Olympic Games, which begin in July.

Bach referred to anti-coronavirus measures for the Games as outlined in the "playbook" published by the IOC, the Tokyo Olympic and Paralympic Games organizing committees and others. Its revised edition is due to be released next week.

Bach assured the safe operations of the Games and the Olympic Village, citing plans to conduct frequent virus tests, limit the movement of people to within so-called bubbles and have athletes and officials from overseas get vaccinated.

Sources say that Bach plans to visit Japan to attend the Olympic torch relay ceremony in Hiroshima next month.

During Wednesday's news conference, Bach didn't elaborate on the visit, only saying it is being planned.

South Korea Reaches To Knockout Round Defeating Portugal By Agencies 2 days, 12 hours ago

World Cup 2022: Australia Advanced To The Round Of 16 By NEW SPOTLIGHT ONLINE 4 days, 5 hours ago

US Defeats Iran Reaching Quarterfinal Of World Cup 2022 By Agencies 5 days, 12 hours ago