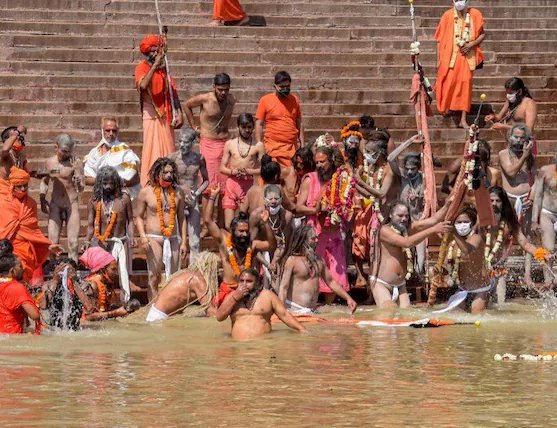 The Kumbh Mela came to an end on Friday. A total of seventy lakh people participated in the major religious event even as the second wave of Covid-19 raged on in the country

Seventy lakh devotees participated in Haridwar’s Kumbh Mela, the mammoth religious congregation which ended Friday after triggering a scare that it might have acted as a coronavirus ‘super-spreader”.

Despite the huge number of people gathering around Haridwar to take a dip in the holy Ganga, the 2021 event was a comparatively modest event -- reduced to just one month and scaled down midway due to the raging pandemic.

Held over three months in normal circumstances, the Kumbh Mela this time formally begun as late as April 1 due to concerns over Covid-19.

About 2,600 devotees tested positive out of the nearly two lakh tests conducted by medical personnel during the mela.

Three shahi snans took place during the event on April 12, 14 and 27, the last one being reduced to a largely symbolic event. Haridwar's Chief Medical Officer S K Jha said the Kumbh was a big challenge considering its potential to fuel the surge of coronavirus.

Medical officer for Kumbh Arjun Singh Sengar said, "The situation was challenging for us as the crowd, though relatively smaller this time was big enough to violate the norms of social distancing.”

“The seers were initially reluctant to go for tests but they relented after the second shahi snan on April 14,” he said.

“With the help of healthcare personnel brought from Uttar Pradesh, we conducted a total of 1,900,83 tests, out of which 2642 reported positive,"

The “scaling down” is said to be the first in the history of the mela, which is held once every twelve years in Haridwar.

The crowds began petering out after an appeal by Prime Minister Narendra Modi to the seers to keep their representation in Kumbh symbolic.

The Joona Akhada, the largest among the sects which attend the mela, was the first to respond to Modi's appeal, followed by several other akhadas which withdrew from the event.

Ordinary devotees then followed their example.

Mela organisers claim that the event, among the largest religious gatherings on earth, passed off without any serious untoward incident anywhere in the Kumbh Mela Kshetra spread over an area of 641 hectares from Haridwar to Devprayag.

Mela Inspector General Sanjay Gunjyal claimed this to be a “first” since 1912.

"A stampede, a clash or a dispute among seers of different Akhadas marked most of the editions of the event in the past. But this time, despite the extraordinary circumstances arising out of a strong second wave of coronavirus, the Kumbh Mela passed off without any interruption," he said.