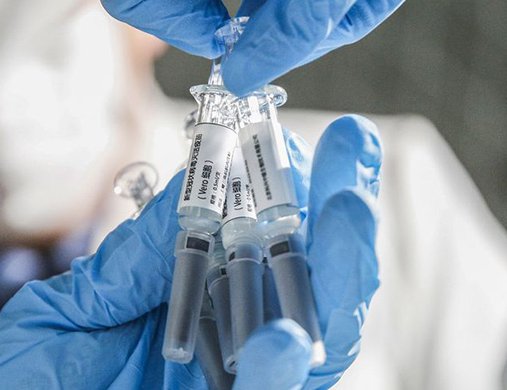 France has joined the United States in calling for a temporary waiver of intellectual property protections for coronavirus vaccines, while other developed countries oppose such a move.

French President Emmanuel Macron said on Thursday he was absolutely in favor of such a waiver. He said vaccines should be available to people around the world.

It was a turnaround from Macron's cautious stance after the US expressed its support for such a waiver.

Meanwhile, a spokesperson for Germany said the protection of intellectual property is a source of innovation and must remain so in the future. German companies are among those that develop and produce vaccines.

Britain is also cautious about such a waiver.

Discussions on COVID-19 vaccine patents are underway at the World Trade Organization. South Africa and India have proposed a waiver on rights so vaccines can be manufactured freely.

The idea has gained support among developing nations who seek a secure supply of vaccines. But some developed nations that are home to major pharmaceutical companies have been reluctant to sign on.

WTO Director-General Ngozi Okonjo-Iweala on Thursday called on members to take urgent action, saying, "the world is watching and people are dying."

But developed nations remain divided, and there appears to be no prospect so far for the introduction of a temporary waiver on vaccine patent rights.

36 People Die Due To Dengue By Agencies 3 days, 23 hours ago