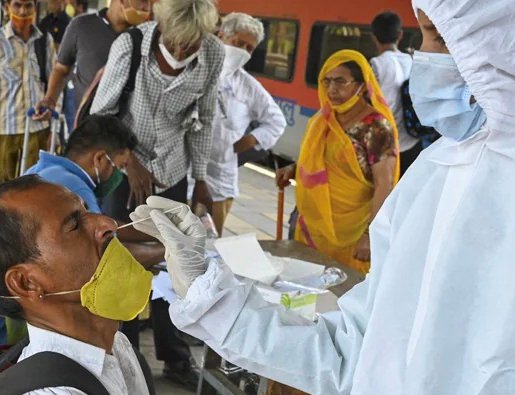 Maharashtra has reported the highest daily new cases at 56,578. It is followed by Karnataka with 47,563 while Kerala reported 41,971 new cases. Maharashtra, Karnataka and Delhi are among 10 states that account for 71.75 per cent of the 4,03,738 new COVID-19 cases registered in a day, the Union Health Ministry said on Sunday.

The other states in the list of 10 are Kerala, Tamil Nadu, Uttar Pradesh, Andhra Pradesh, West Bengal, Rajasthan, and Haryana. Those starts including West Bengal, Bihar and Utter Pradesh with which Nepal share the border.

Maharashtra has reported the highest daily new cases at 56,578. It is followed by Karnataka with 47,563 while Kerala reported 41,971 new cases A total of more than 30.22 crore tests have been conducted so far across the country while the daily COVID-19 positivity rate stands at 21.64 per cent, the ministry said.

“The National Mortality Rate has been falling and currently stands at 1.09 per cent,” the ministry said.

Ten states account for 74.93 per cent of the new deaths. Maharashtra saw the maximum casualties (864). Karnataka follows with 482 daily deaths.

The ministry said the cumulative number of COVID-19 vaccine doses administered in the country has exceeded 17 crore.

Maharashtra, Rajasthan, Gujarat, Uttar Pradesh, West Bengal, Karmataka, Madhya Pradesh, Kerala, Bihar and Andhra Pradesh account for 66.78 per cent of the cumulative doses given so far in the country, the ministry said.

Cumulatively over 17.84 lakh beneficiaries in the age group of 18-44 years have received their first dose of COVID vaccine.

Across 16,722 sessions, 8,37,695 beneficiaries were vaccinated for first dose and 11,85,837 beneficiaries received their second dose of vaccine.

The ministry said the global community is extending a helping hand to support India’s efforts to meet the challenges and requirements of the unprecedented surge in the number of COVID-19 cases in the second wave of the global pandemic.

The Centre has been ensuring the global aid is being effectively and promptly allocated and delivered to states and UTs to supplement their efforts during this critical phase, the ministry said.