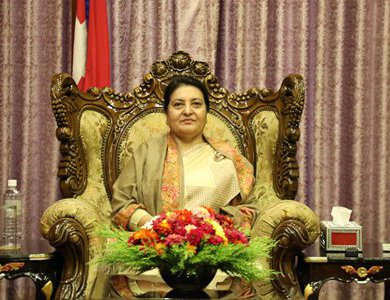 President Bidya Devi Bhandari has called for the political parties to submit the name of a party leader, who could garner majority votes in the support of two or more political parties representing the House of Representatives for the appointment to the post of the Prime Minister of Nepal as per the Article 76 (2) of the Constitution of Nepal by May 13.

Oli was appointed Prime Minister of Nepal on February 15, 2018 as per the Article 76 (2). Earlier in the afternoon, Prime Minister KP Sharma Oli failed to garner the vote of confidence in the House of Representatives (HoR) on Monday. Of the 232 lawmakers present in the special session of the House, only 93 voted in favour of the proposal of the Prime Minister while 124 voted against it and 15 lawmakers stayed neutral.

After losing the vote of confidence, PM Oli has been relieved of his position.

The 275-member Lower House has now 271 members, after expulsion of four members elected from the Maoist Centre, while four others are suspended.

During the voting today, 34 lawmakers remained absent. Of the absentees, 28 were from the ruling CPN-UML.

Dr. Rojnath Pandey, secretary in the Parliament Secretariat, said that the secretariat knew that 34 lawmakers were absent in the voting process, but he did not know which parties they belong to.

According to him, the Speaker did not cast his vote.

Constitutionally, the Speaker casts his vote only when there is a tie in any decision. Oli needed 136 votes to remain in the post as the HoR currently has only 271 members, but he was short of 43 votes.

Although the ruling CPN-UML party has 121 members in the House, 28 members close to senior leaders Madhav Kumar Nepal and Jhalanath Khanal did not attend the special session. Nepali Congress that has 61 members and the Maoist Centre having 49 members voted against Prime Minister Oli.

However, lawmakers of Janata Samajwadi Party-Nepal divided as 15 of its 32 members remained neutral and others voted against the Prime Minister.

Speaker Agni Prasad Sapkota, after the voting, informed the Prime Minister’s motion to seek the vote of confidence in the House was rejected, as the votes cast in favour of the motion fell short to achieve a majority of the existing strength of the House of Representatives.

Meanwhile, President has asked the present government to continue in office until the formation of next government.