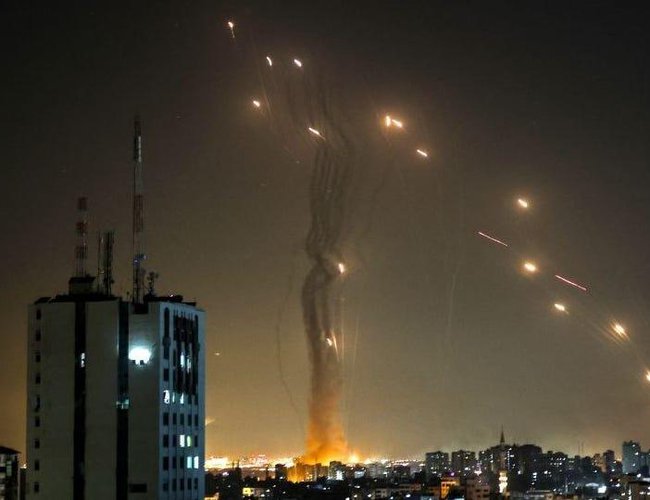 The Islamic fundamentalist group Hamas, which controls the Gaza Strip, fired 130 rockets into the city and its surroundings on Tuesday evening. Many were shot down by the military, but local media report that the attacks resulted in one death and multiple injuries.

The Israel Defense Forces (IDF) released a video of its Iron Dome air defense system filling the sky with interceptors as more than 100 rockets rained down on Tel Aviv and central Israel Tuesday evening, the latest in a string of rocket attacks over the past couple of days.

Tensions between Israel and Hamas soared this week as Palestinian militants began firing rockets at Israel on Monday evening and Israel conducted airstrikes on targets in Gaza in a serious escalation of violence.

The recent fighting appears to be some of the most intense since the 2014 conflict, and it has already left dozens dead, The Associated Press reported. While there have been losses on both sides, the majority of the casualties have been on the Palestinian side, and the dead include both combatants and civilians.

During the fighting on Tuesday, an Israeli airstrike struck a high-rise office and residential building controlled by Hamas. Though occupants were warned to evacuate, an IDF spokesman said that "we expect that this powerful attack on the high-rise building, which shook all of Gaza, will lead to extensive shooting toward Israel,"

Prime Minister Benjamin Netanyahu told a hastily arranged news conference that the country is at the height of a weighty campaign. He warned that the militants will pay a very heavy price.

The attacks were in response to airstrikes Israel carried out on Gaza after Hamas reportedly fired more than 500 rockets into Israel and killed two people between Monday and Tuesday.

Health officials in Gaza say the airstrikes killed 30 people, including children, and injured more than 200.

Clashes first erupted in Jerusalem between Israeli security forces and Palestinian visitors to the city's holy sites during the Muslim holy month of Ramadan that began in mid-April.