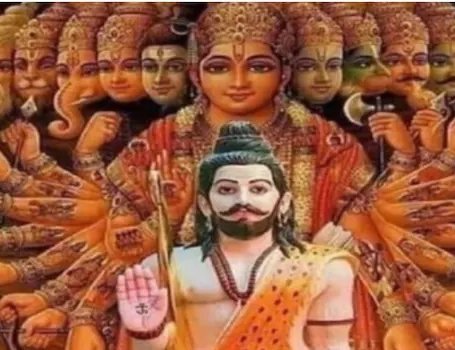 Parshuram Jayanti is observed to commemorate the birth anniversary of the sixth incarnation of Lord Vishnu – Parshuram. The day falls in the Shukla Paksha Tritiya in the month of Vaishakh. It is believed that Lord Parshuram was born during the Pradosh Kala. Once Tritiya begins during the Kala period, the time is considered appropriate for observing Parshurama Jayanti.

Devotees start the day by wearing traditional clothes after taking a holy bath before sunrise. They observe fast which starts from a night before. The devotees worship Lakshminarayan, a form of Lord Vishnu, and offer tulsi leaves, chandan, kumkum, fresh flowers, according to Jagran. The day is also believed to be the beginning of Tretayug.

Lord Parshuram or Parshuram avatar, the sixth incarnation and the warrior form of Lord Vishnu, is believed to be immortal. According to mythology, Parshuram, the son of sage Jamadagni and Renuka, was born on this day. Parshuram Jayanti coincides with the auspicious Akshaya Tritiya and falls on the third day of the Full Moon phase or Shukla Paksha in the month of Vaishakh. Legends say, Lord Parshuram descended on earth to remove the evil. This avatar of Lord Vishnu is believed to be an aggressive one and an expert in warfare.

Parshuram was a devotee of Lord Shiva

According to legends, Lord Shiva also tought Parshuram the art of warfare

Legends say, Parshuram could not be defeated in warfare after he was blessed with Lord Shiva's weapon

Parshuram is believed to have tought the skills of using weapons to famous characters of the Mahabharata like Bhishma, Dronacharya and even Karana.

It is even believed that he still lives on the earth and will teach warfare to Kalki, the tenth form of Lord Vishnu

Like Lord Shiva, Lord Rama, Krishna and other gods, Parshuram is not worshipped.

He is believed to be born at the Janapav hills in Indore and there is still a Shiva temple on the hilltop where Parshuram is believed to have meditated and worshipped Lord Shiva.

Legends about Parasurama often talk about anger and violence, and the ill effects of anger.

Two Shilas Left For Ayodhya From Janakpurdham By Agencies 6 days, 23 hours ago