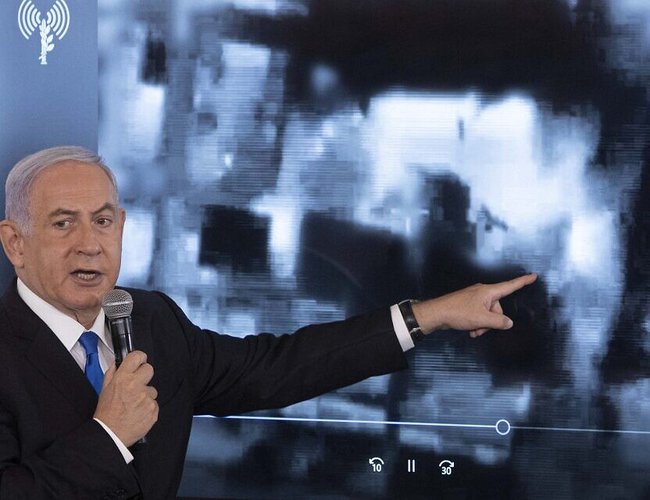 Israeli Defense Minister Benny Gantz warns ‘all options are on the table’ as fighting shows no sign of abating; adds that in the Strip, ‘high-rises are falling down, commanders are being killed’

Defense Minister Benny Gantz said Wednesday that the military operation will continue in the Gaza Strip for as long as necessary and that there is currently no end in sight.

“Israel is not preparing for a ceasefire. There is currently no end date for the operation. Only when we achieve complete quiet can we talk about calm,” Gantz said during a tour of rocket-hit Ashkelon. “We will not listen to moral preaching from any organization or institution regarding our right and duty to protect the citizens of Israel.”

Gantz added that the military “has over the last hours been carrying out a series of significant attacks, we have hit commanders, important Hamas infrastructure… we have hit many hundreds of targets, high-rises are falling down, factories are collapsing, tunnels are being destroyed and commanders are being killed.

“All means and all options are on the table,” he added.

Over 1,050 rockets and mortar shells have been fired from the Gaza Strip toward Israel since the outbreak of fighting on Monday evening, including some 200 on Tuesday night and Wednesday morning alone, according to the IDF, as fierce fighting between the Israeli military and Palestinian terrorist group entered its third day with no signs of abating.

Roughly 200 of the total number of rockets failed to clear the border and landed inside the enclave, the military said. IDF Spokesperson Hidai Zilberman said the Iron Dome air defense system had an interception rate of between 85 and 90 percent for rockets heading toward populated areas.

At least six people in Israel have been killed — three on Wednesday and three on Tuesday — and dozens more have been injured in the rocket attacks from Gaza, some seriously, including a 5-year-old girl in critical condition.

On Wednesday morning, Hamas operatives fired an anti-tank guided missile at an Israeli jeep on the Gaza border, killing one person, seriously injuring another and moderately injuring two more, according to Israeli authorities.

Immediately after the missile attack, terrorists in the Strip fired waves of mortar shells at the area, around the community of Netiv Ha’asara just north of the Strip, in an apparent effort to keep medical teams and security forces away. The injured people were eventually taken to the nearby Barzilai Medical Center in Ashkelon. Medics said the four men, three in their 20s and one in his 40s, all sustained injuries from shrapnel and the force of the blast.

Referring to that attack, Gantz said: “There are operational events near the border and we are also dealing with them to defend the residents of the south, even at the price of our forces being harmed, unfortunately.”

The Israel Defense Forces immediately launched a series of strikes in the area, apparently targeting the cell that fired the missile, killing at least four people, according to Palestinian media. Additional Israeli strikes were reported throughout northern Gaza following the anti-tank guided missile attack.

Earlier in the day, the IDF launched massive raids on Hamas targets in the Gaza Strip, as terrorists in the Strip fired large barrages of rockets at central and southern Israel, killing an Arab Israeli man, Halil Awad, and his teenage daughter Nadine.

Smoke rises from the Gaza Strip following an IDF attack in response to an anti-tank guided missile attack from the enclave on an Israeli jeep near the community of Netiv Ha’asara on May 12, 2021. (Screen capture)

In all, the IDF struck upwards of 500 targets in the Gaza Strip, aimed at Hamas personnel, weaponry and infrastructure throughout the enclave, with plans to attack more in the coming hours and days, Zilberman said.

Those included targeted killings of top Hamas and Palestinian Islamic Jihad commanders and the destruction of a number of high-rise buildings that the IDF said were used by the terror groups as command centers, intelligence bases and weapons research and development facilities. 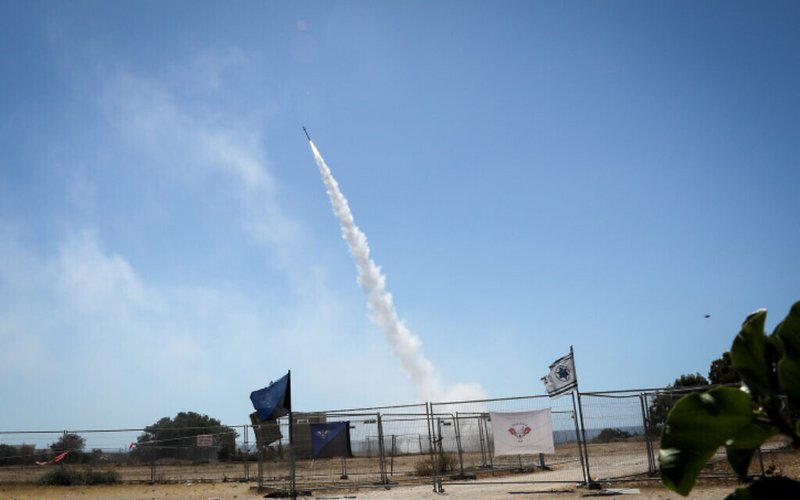 The IDF spokesman said the military was also conducting large-scale arrest raids of Hamas operatives in the West Bank out of concern that they may attempt to carry out attacks there in parallel to the fighting in Gaza. According to the Strip’s Hamas-run Health Ministry, 43 Palestinians have died since Monday night, including 13 minors, and 296 have been wounded. The IDF said more than half of those killed were members of terror groups involved in the fighting and that some, including several of the children, were killed by errant rockets fired from Gaza that fell short of the border and landed inside the Strip, not by Israeli strikes.

In addition to Gantz, other Israeli officials on Wednesday also said they had no intention of entering an immediate ceasefire and planned to have the IDF continue striking targets associated with Hamas, Islamic Jihad and other terror groups in the Strip in order to both restore deterrence against them to prevent future attacks and to significantly weaken their capabilities.

Asked how much longer the IDF believed Hamas had the ability to fire rockets at central Israel, the spokesman said Wednesday morning that the terror group was likely depleting its arsenals, but could still launch large barrages in the coming days.

“Hamas’s stamina is running out, but this is an organization with stamina. It won’t run out in 24 hours,” Zilberman told reporters.

Hamas, which is officially dedicated to the destruction of the State of Israel, took effective control of the Gaza Strip in 2007 from the Palestinian Authority in a violent coup. Since then, Israel has imposed a naval blockade on the enclave, as well as stiff control over what can enter the Strip, maintaining that it is necessary in order to prevent terror groups from smuggling weapons into the area.

Palestinian terror groups have tied the attacks to the unrest in Jerusalem connected to both prayer on the Temple Mount during the Muslim holy month of Ramadan and the pending eviction of a number of Palestinian families from their homes in East Jerusalem’s Sheikh Jarrah neighborhood.

Israel has fought three large operations against Hamas and other terror groups in the Gaza Strip since 2008, most recently in 2014 with a 51-day war known as Operation Protective Edge.

Source: The Times of Israel

127 People Die In Stampede After Soccer Match In Indonesia By Agencies 10 hours, 40 minutes ago

Putin Declares Annexation Of 4 Territories Of Ukraine To Russia By Agencies 1 day, 10 hours ago