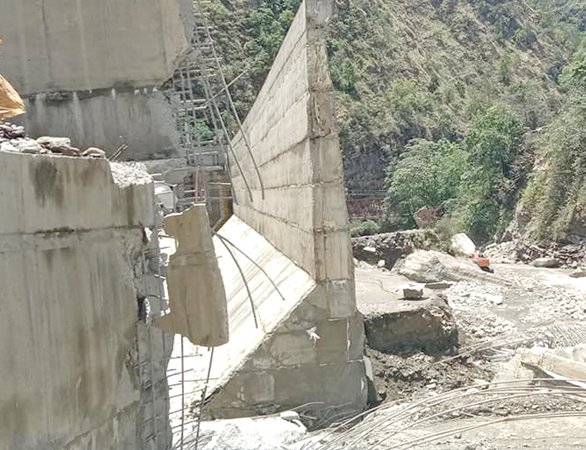 Dam of Likhu-4 Hydroelectricity Project got damaged during the testing on Friday morning.

The dam of the 52.4-Megawatts (MW) project at Likhu River bordering Okhaldhunga and Ramechhap districts collapsed soon after water was sent to its channel on Thursday.

About 90 per cent work of the project is completed. Civil works at the site are being handled by an India-based SSNR which has been constructing the dam, desilting chamber and other structures. Likewise, Nepali company South Asian Infrastructure has been constructing powerhouse, valve south and surge shaft.

After the completion of the project, water would be channeled to a tunnel from the constructed dam at Khijidemba Rural Municipality, in Ward No. 3, to Electricity Generation House in Limti.

Initially, the project was designed with the capacity of 120 MW, but later the promoter company reduced the capacity to current 52.4 MW.

The Rs. 10.16 billion project is financed by a consortium of Laxmi Bank, Global IME Bank, Nabil Bank, Sunrise Bank, Nepal SBI Bank, Sanima Bank and Prabhu Bank. The banks are investing about 75 per cent of the total cost while the promoters, Triveni Group and Bishal Group, will invest 25 per cent.

The project had signed the Power Purchase Agreement with the Nepal Electricity Authority about five years ago and its completion was scheduled for August of 2020.

Local people blamed the developer Green Ventures and the SSNR for the damage.