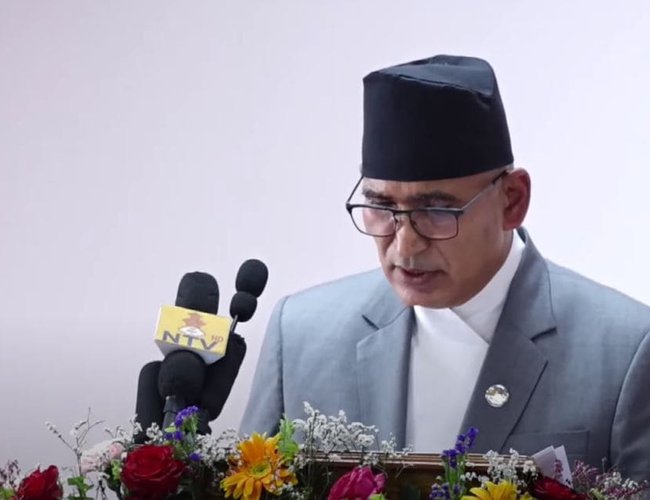 Critics including the opposition Nepali Congress termed, the new budget for the fiscal year 2021-22 as a document of the populist agenda of the elected government. However, the budget presented by finance minister Poudel, a non-technocrat, has some positive side as well.

Unlike his predecessor technocrats like Dr. Yubaraj Khatiwada, the budget presented by Poudel is more realistic and touched the day-to-day difficulties of the common people.

Finance Minister Paudel on Saturday (29 May) announced a budget of Rs 1.647 trillion for the upcoming fiscal year 2021/22. Minister Paudel announced that of the aforementioned amount 41.2 percent has been allocated for recurrent expenditure while 22.7 percent, 12.6 percent and 23.5 percent have been designated for capital expenditure, debt financing and transfer to local to the provinces and local bodies, respectively.

He said that the new budget that aims to attain an economic growth of 6.5 percent in the upcoming fiscal year plans to collect Rs 1.024 trillion through revenues and Rs 63.77 billion through foreign grants while the remaining amount will be covered through foreign loans and domestic borrowing.

To achieve the target, the government has increased all existing security allowances by 33 percent in line with which the elderly (70+) citizens will now receive Rs 4,000 in allowance per month.

To tackle the looming COVID-19 pandemic, the government has allocated Rs 26.75 billion for procurement of vaccines while Rs 4 billion will be spent on purchasing COVID-19 related medical supplies. Similarly, in an attempt to revive the tourism sector the government has decided to allow 10 days of paid leave to civil servants.

The government in a bid to encourage the use of electronic vehicles has decided to waive renewal and road tax of EVs for the next five years while another plan to replace fossil-fuel vehicles in the next 10 years has also been stipulated.

The size of the federal budget presented through the ordinance by Finance Minister Bishnu Prasad Poudel today is 11.73 percent bigger than the budget of Rs 1,474.64 billion announced for the current fiscal year, 2020-21. The budget for the current fiscal was, however, reduced by around nine percent to Rs 1,344.68 billion during the half-yearly budget review in February.

Thus, compared to the revised budget size, the budget for the next fiscal year is even bigger at 22.52 percent. While the earlier budgets used to factor in grants to be distributed to the lower levels of the government as recurrent budget, the budget announced for next fiscal has allocated that amount separately.

Therefore, the allocation of Rs 678.61 billion to be utilized as recurrent expenditure for the next fiscal is significantly lower than Rs 948.94 billion allocated and later revised to Rs 914.78 billion for the current fiscal. The allocation for the capital budget is Rs 374.26 billion, while Rs 207.97 billion has been earmarked for financing, which is 22.7 percent and 12.6 percent of the total budget for fiscal 2021-22, respectively.

Minister Poudel announced that Rs 386.71 billion would be transferred to the provincial and local governments, which is 23.5 percent of the total budget. Of the grant distribution, Rs 325.74 billion or 84.2 percent will be an equalization grant, while 60.97 billion or 15.8 percent will be a conditional grant. Meanwhile, the government has set the revenue collection target for the next fiscal at Rs 1,024.90 billion. It plans to seek foreign grants and loans of Rs 63.37 billion and Rs 309.29 billion, respectively. Furthermore, the government plans to finance its expenses through domestic loans amounting to Rs 250 billion. The annual economic growth of the country has been set at an optimistic 6.5 percent for the next fiscal year 'as the government will make efforts to control the COVID-19 spread and help revive businesses and the economy.

A budget of Rs 122.77 billion allocated to the Ministry of Health and Population, however, pales in comparison to Rs 180.04 billion allocated to the education sector - the biggest chunk given to any particular sector.To provide some relief to COV- ID-battered industries, the government has announced a waiver on the demand charge for electricity throughout the lockdown period to hotels and production-based industries.

The finance minister also announced license and renewal fee waivers for sectors such as films, handicrafts, aviation, media, advertising, health clubs, among others. In addition, the government will contribute the amount to be paid by organizations and workers to the Social Security Fund for the months of mid- May to mid-June and mid-June to mid-July.

To encourage entrepreneurship, the government has announced a 100 percent rebate on income tax for start-ups for up to five years from the date of commencement of operation, a one-stop system to facilitate the establishment and operation of such start-ups, among other provisions. In an attempt to revive the badly battered tourism sector, the government has decided to allow 10 days of paid leave to civil servants and free one-month visas to tourists. Moreover, the government has increased the social security allowance by 33 percent and raised the monthly allowance for senior citizens by Rs 1,000 to Rs 4,000.

Also, the salary of all civil servants has been hiked by Rs 2,000.In a bid to encourage the use of electric vehicles, the government has decided to waive the renewal fee and road tax on EVs for the next five years, while also setting the target to replace light vehicles running on fossil fuel by EVs by 2032.In this regard, a task force of experts will be formed, the minister said.

The government has estimated the annual growth rate to stand at around four percent in the next fiscal year. Due to the dissolution of the House of Representatives, Finance Minister Poudel presented the budget through the ordinances. Presenting the budget, he has projected the economic growth rate for the economy hit hard by the COVID-19 pandemic.

The per capita disposable income is expected to reach the US $ 1,486 by the next fiscal year, according to the government’s estimate. It was then sent to the Office of the President to be certified by President Bidya Devi Bhandari.

Finance Minister Paudel, in his budget speech, stated that an annual growth rate of around four percent has been estimated for the next fiscal year while the projected per capita disposable income in the same period is USD 1,486.

The FM revealed that the government will waive taxes on hospital equipment required for installing oxygen plants. Likewise, Paudel shared that a 50 percent subsidy would be provided to all hospitals for installing oxygen plants. The government has also decided not to impose taxes on the purchase of medicines, and no VAT or customs duty on the import of Covid-19 related supplies.

A 300-bed hospital in Kathmandu would be built keeping in mind treatment of communicable, highly contagious and other illnesses, he added. The Finance Minister is presenting the annual budget from Singhadurbar.

The Finance Minister further said that the government tabled the budget in order to fulfill its responsibility towards the people and to implement the Constitution.

He argued that the government has been struggling with the current situation created by COVID-19.

Minister Poudel clarified that the government has made arrangements of the necessary health budget as it is responsible for the people’s health.

FM Poudel suggested private sector to involve in economic activities, adding the next government has to implement the budget brought by the incumbent government.

Saying the election was not the government’s choice, he shared it was the compulsion of the situation but the election would not hamper the implementation of the budget.

President of Federation of Nepalese Chambers of Commerce and Industry, Shekhar Golchha, said that the government has addressed 60 percent demands of FNCCI, adding that the budget is overall good.

President of Confederation of Nepalese Industries, Satish Kumar More, opined that though it was challenging in budget implementation and to fulfill the goal set by the budget, the budget is positive.

Nepali Congress leader and former Finance Minister Dr. Ram Sharan Mahat have criticized the new budget for its bigger size and the one being brought at a time when many ongoing development projects have not been implemented.

He accused the incumbent government that has recently announced new election dates without discussions of bringing full budget for the fiscal year 2021/22 through an ordinance.

The NC leader was speaking at a budget review here on Sunday by the School of Democracy. “The budget has been brought with an intention of influencing the elections. The caretaker government has only the responsibility of continuing ongoing programs. But it cannot bring supplementary budget,” he said.

Compared to previous finance ministers, finance minister Poudel has many limitations this year. As a finance minister of an elected government and the country has been passing through a very critical period due to surge of COVID-19, Poudel too has presented the budget taking the consideration politics and economy.

BEEN Energy Efficient Building By A Correspondent 2 days, 7 hours ago