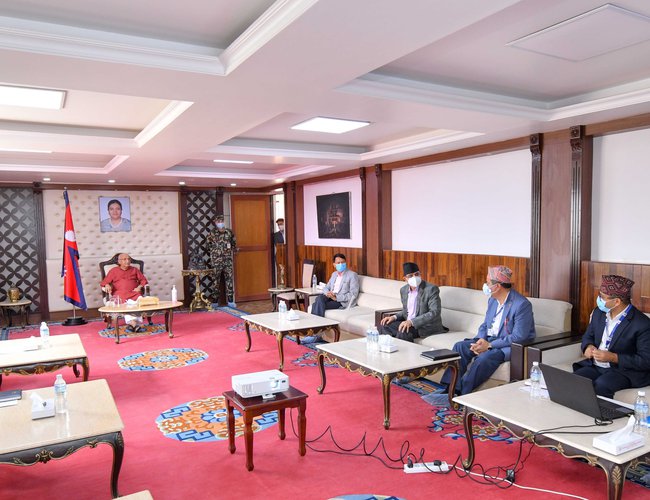 Prime Minister KP Sharma Oli has directed the Ministry of Water Supply (MoWS) to immediately begin the work to bring the water of the Yangri and Larke rivers in Sindhupalchowk district to the Kathmandu Valley.

He asked the Ministry to make no delay in launching the second phase of the Melamchi Water Supply Project to bring additional 340 million litres per day (MLD) of water to the Kathmandu Valley following a briefing about the project by the MoWS officials at his official residence in Baluwatar on Thursday.

The first phase of the project has brought 170 million litres of water to the Valley from the Melamchi River. The second phase project will add 170 MLD of water each from the Yangri and Larke rivers to total the amount of water flowing to the valley to 510 MLD.

Prime Minister Oli also asked the MoWS to begin the construction of the water treatment plant. The treatment plants of 85 MLD capacity each have been already built for the first phase. The distribution of Melamchi water in Kathmandu had begun on April 3. Speaking at the water distribution inauguration programme, PM Oli had directed the MoWS to create environment to add the water of the two rivers to the existing channel by 2024.

According to the Melamchi Water Supply Project (MWSP), water from Yangri and Larke rivers could be brought to the valley within the next four years.

The Yangri river is 9 km away from Melamchi head works and Larke is further 2 kilometres farther away.

A 9-km-long tunnel would be built up to Yangri while the tunnel to Larke will have two parts, one for water and another for vehicular movement. The MWSP said that the procurement process for the second phase project would begin within three months.

Meanwhile, the MWSP has halted the supply of Melamchi water for about a month to conduct the final testing in the tunnel. The entire 26.5 km tunnel will be emptied to check if there are any problems. It would take 10 days to drain the water, about a week to conduct the tests and two weeks to fill water in the tunnel.

The amount of water in the supply channel would be increased by about 40 MLD which will give relief to the distribution authority, the Kathmandu Upatyaka Khanepani Limited (KUKL).