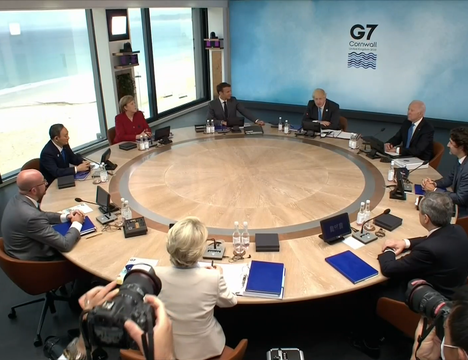 The Group of Seven leaders are expected to issue a declaration at their ongoing summit that calls for the development of vaccines and treatments within 100 days during future health crises.

The talks began in Cornwall, Britain, on Friday. They plan to hold discussions about preventing pandemics on Saturday.

The British government says the declaration is also expected to call for support to reform and strengthen the World Health Organization.

The leaders are also expected to collectively offer one billion coronavirus vaccine doses to the rest of the world.

Britain says the Group of Seven nations are likely to agree to provide the world with at least 1 billion doses of coronavirus vaccines, as part of the effort to contain the pandemic.

The first in-person G7 summit in around two years will begin on Friday afternoon, local time, in Cornwall, southwest England.

One subject on the agenda will be how to distribute the vaccines in order to stem the spread of the virus worldwide.

In a statement released on Thursday, Britain, the host of the summit, said world leaders are expected to announce that they will provide at least 1 billion vaccine doses to the world in order to end the pandemic in 2022.

In the lead-up to the summit, British Prime Minister Boris Johnson expressed his intention to call on the leaders to help vaccinate the entire world by the end of next year. He says Britain will donate at least 100 million shots.

The United States has also pledged to provide 500 million doses. But it is unclear whether that figure is included in the 1 billion doses that Britain mentioned.

Japan To Lower COVID-19 Classification On May 8 By Agencies 4 hours, 9 minutes ago