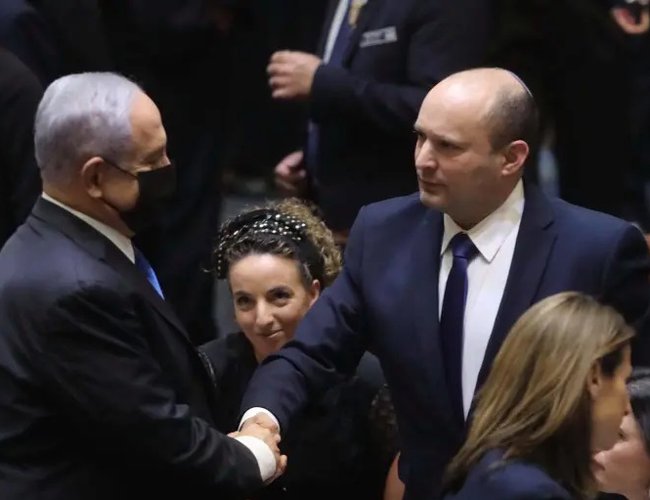 Bennett was sworn in as Israel’s 13th prime minister and Lapid as the 14th.Israel has sworn in a new coalition government made up of parties from a broad political spectrum. It replaces the longstanding administration led by Benjamin Netanyahu.

The parliament approved the new government on Sunday by a vote of 60 to 59.

An agreement to form the coalition followed about two months of negotiations in the aftermath of an inconclusive general election in March. That was the fourth national election in two years.

The new government consists of eight parties from the right, left, center and Arab. It entails the centrist, second largest party Yesh Atid and the rightwing Yamina.

Yamina leader Naftali Bennett is the new prime minister. He replaces Netanyahu who served in the post for 12 years from 2009.

Global attention is focused on to what extent the coalition can run the government in a stable manner.

The new government passed at 8:55 with the support of 60 MKs, while 59 opposed it. Ra’am (United Arab List) MK Saeed Alharomi abstained.

The MKs in the new coalition and their family members in the visitors’ gallery erupted in applause when the results were announced.

The ministers then took turns being sworn in. Bennett was sworn in as Israel’s 13th prime minister and Lapid as the 14th.

Bennett convened the government for its first meeting at the Knesset. The historic photo of Israel’s 36th government will be taken at the President’s Residence on Monday.

Earlier on Monday, Bennett defiantly presented his new government’s ministers and guidelines in an address at the Knesset plenum, while MKs who will be in the opposition heckled him constantly.

At the moment when Bennett started his speech introducing his government, Religious Zionist Party head Bezalel Smotrich and other MKs shouted, “Shame,” while waving posters of victims of terrorism. They were removed from the plenum.

“I am proud that I can sit in a government with people with very different views,” Bennett told his hecklers in the Knesset plenum, adding that they seemed to have a problem with losing power.

Bennett called on all sides of the political spectrum to display restraint. In recent years, Israel had stopped being managed as a country, he said.

“The loud tone of the screams is the same as the failure to govern during your term in office,” Bennett snapped back at the Likud MKs.

Shas and United Torah Judaism MKs heckled Bennett, calling him a liar and a cheat. But Bennett promised to help the haredi (ultra-Orthodox) sector, even though its MKs would not be part of his government. He pledged to build a new haredi city for the sector’s growing population.

“This is not a day of mourning,” Bennett said. “There is no disengagement here. There is no harm being caused to anyone. There is a change of government in a democracy. That’s it. And I assure it is a government that will work for the sake of all the people.

“We will do all we can so that no one should have to feel afraid. We are here in the name of good and to work. And I say to those who intend to celebrate tonight, don’t dance on the pain of others. We are not enemies; we are one people.”

In the address, Bennett said his government would prevent the nuclearization of Iran and would not permit rocket fire on Israeli citizens from the Gaza Strip. Bennett thanked US President Joe Biden’s administration for its support during the war in Gaza and pledged to maintain bipartisan support in the US.

Bennett made a point of starting his address by praising outgoing prime minister Benjamin Netanyahu for his hard work over the years for the State of Israel and his wife, Sara, for her dedication. Netanyahu deserved credit for his outreach to Ra’am head Mansour Abbas, he said. The new government would take unprecedented steps to reach out to the Arab sector, he vowed.

Lapid canceled his planned speech and merely said the behavior of MKs in the outgoing government reminded him, his mother and all citizens of Israel why it was so important to replace them.

While Netanyahu spoke, MKs in the coalition being formed were completely silent, making a point of showing him respect. The only MKs who heckled him were from the Joint List, until Meretz leader Nitzan Horowitz mentioned the criminal charges against Netanyahu near the end of the address.

A crisis was avoided earlier when Ra’am MK Saeed Alharomi said he would not oppose the new government, following a threat.

Nothing could interfere with the swearing in of the new government on Sunday night, Abbas told reporters at the Knesset, adding that “we will all vote in favor of the government.”

In return for his support of the new coalition, Alharomi demanded that a clause in the coalition agreement regarding illegal construction in the Negev be canceled.

Netanyahu and interior minister Arye Deri pressured Alharomi and offered him assurances, including on the topic of the Kaminitz Law that addresses illegal construction, in an attempt to get him to vote against the government.

Netanyahu would remain in power if the prospective new coalition’s razor-thin majority were to lose the support of even one MK in a vote of confidence in the Knesset. If Alharomi abstains in the confidence vote, Joint List MKs could come to its rescue and vote in favor.

The Likud responded that it would be shameful if the government were formed through the backing of MKs who support terrorists and do not recognize Israel as a Jewish-democratic state.

China Partially Lifts Lockdown In Southern City of Guangzhou After Protests By Agencies 3 days, 4 hours ago

Beijing Grapples With 'Zero-COVID' Unrest By Agencies 5 days, 4 hours ago