Euro 2020: Italy Beats Switzerland By 3-0 Maintaining The Lead In The Group.

Euro 2020: Italy Beats Switzerland By 3-0 Maintaining The Lead In The Group. 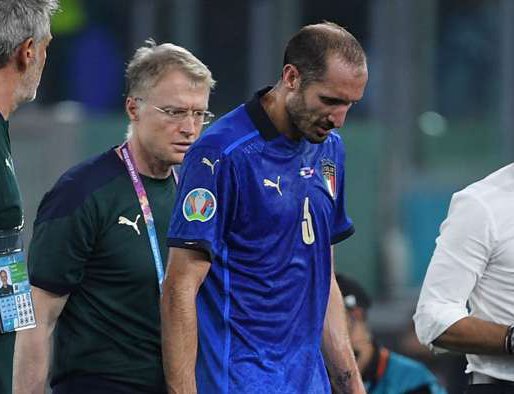 Roberto Mancini said Italy captain Giorgio Chiellini will need to undergo further testing after limping off injured in a 3-0 win over Switzerland in the Euro 2020 group stage on Wednesday.

Mancini said he hopes it's nothing serious but admitted he will not be sure until Thursday.

The centre-back left after just 24 minutes, but the Azzurri still managed to thump their Swiss counterparts with their second straight three-goal effort.

“This is what happens with a tournament after a long season, there is fatigue, you have to be always ready when called upon," Acerbi said.

“I didn’t even have a second of warm-up. I saw Chiellini seemed fine and then all of a sudden he took off his armband and needed to come off."

“We try to attack and defend as a team, that’s why we score many goals and concede so few," Acerbi said. "It’s been going well so far!

“There might be three or four sides in the tournament who have better talents or individuals, but I said before the competition started that there was something in the air with this group. I think we can go far.”

Roberto Mancini's men became the first team to qualify for the last 16 at the European Championship on Wednesday and judging by their recent form it should come as no surprise.

The Azzurri made it 10 wins on the trot as they swept past Switzerland, and have scored 31 goals since they last conceded. They have hit 59 goals in their past 19 games, conceding just three. They are on a 29-match unbeaten run in which they have scored 80 goals. No wonder they are brimming with hunger and desire.

The numbers all look to be in Italy's favour. So how far can they go as the tournament develops?

'They are a winning machine'

Italy's bold approach saw them score three goals in two consecutive matches at a European Championship for the first time as they swept aside both Turkey and Switzerland.

The manner of those victories has added substance to their tag as one of the pre-tournament favourites.

"They were in control from start to finish and look like a team people will have to take notice of," former Everton midfielder Leon Osman told BBC Radio 5 Live.

"The bigger nations will be wondering what they are like when they don't have the ball, but offensively they look very, very good.

"They are a winning machine but they haven't played against the really big boys if you scrutinise them. If you are looking at Italy for the competition, they haven't been tested yet. That is what the top boys will do."

Speaking on ITV, the former Manchester United and Republic of Ireland midfielder Roy Keane also praised the Italian side.

"What I like about these top teams is they are very good going forward but it is what they are doing out of possession and closing teams down - the desire and work-rate.

"When you have got good players in possession and that hunger and desire, you are going to go places."

Gianluca Zambrotta, who reached the Euro 2000 final with Italy, added: "There were high expectations before tonight and there are even more now. Guys, continue to play with this attitude and to make us dream."

'They enjoy being out there and like taking risks'

With Italy sitting comfortably at the top of their group, Mancini spoke optimistically of his side's chances while acknowledging there will be tough tests to come.

"In the European Championship, there's France, Portugal and Belgium - one of those are world champions, another are European champions and the other are the number-one ranked side in the world," said the Italy boss.

"These are teams who have been built over a number of years and it's only natural they are further along than us but everything can happen in football, you shouldn't take anything for granted.

"Every match is difficult. You always have to go out there and play. I've been fortunate in that I have had some very good players who like playing the game - they enjoy being out there and like taking risks.

"The players are the ones who deserve the credit. I try to explain my thought process and there is still a long way to go."

All going to plan?

Time will tell whether Italy have the firepower to advance in the knockout phases but little has gone wrong so far for Mancini's team.

Ciro Immobile has scored in each of his past three appearances to fend off pre-tournament questions over his international goalscoring record.

And Manuel Locatelli - playing in place of the injured Marco Verratti - was the star of the show against the Swiss, with two goals.

The only slightly negative aspect to a dominant Italy display came in the form of an injury to captain Giorgio Chiellini, who hobbled off with a suspected hamstring strain after 24 minutes.

"It is a big worry. Hopefully it is not too serious but at 36 when you come off early on, it does not look good for the rest of the tournament," said former France midfielder Patrick Vieira on ITV.

'Italy are a joy to watch' - the social reaction