11 Killed And Dozens Are Missing In Manang

11 Killed And Dozens Are Missing In Manang 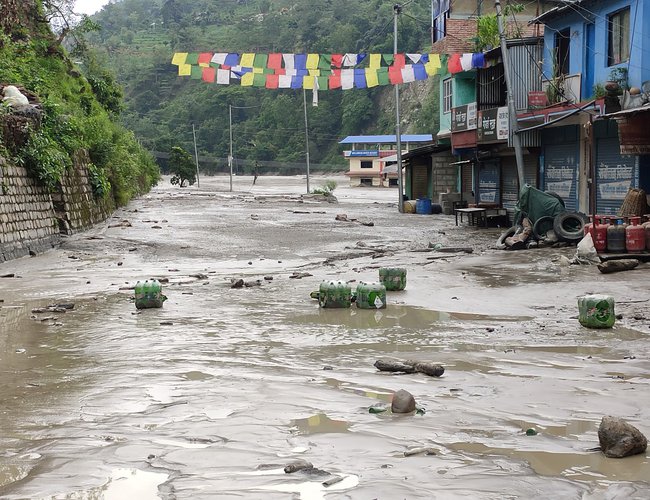 Death toll in monsoon-induced disaster, triggered by torrential rains in different parts of the country, has reached 11.

According to an update made public by the National Disaster Risk Reduction Management Authority (NDRRMA) as of 4:00 pm on Thursday, landslides and floods have left 11 people dead while 25 others are still missing.

The NDRRMA said the devastation has mainly hit 17 districts since June 14, causing complete damage to 129 and partial damage to 114 physical infrastructures. So far, three bodies of those who died in the Sindhupalchowk flood have been identified. One person each was killed in the floods and landslides in Bajura, Gorkha, Palpa, Doti, Jumla, Arghakhanchi, Kaski, Kavre, and Rupandehi districts.

Meanwhile, landslides triggered by heavy rains in the past four days, have blocked roads in Darchula, Salyan, Chitwan and Bajhang districts and damaged property in Lalitpur, Gorkha, Kavre and Kaski districts.

In Manang, 35 people have been rescued from various parts of the Himalayan district. According to Manang Chief District Officer Bishnu Lamichhane, 24 people were rescued from Sirantal of Naso Rural Municipality-1 and 11 people from Thoche Gumba area of ​​Naso by a Nepali Army helicopter. In addition, attempt to rescue 75 people who have been left stranded by the flood in Napiboomi is underway. The attempt has been delayed because of bad weather.

Meanwhile, a child has been found dead in India after being swept away by the Bhutahi Balan River at Belhi of Balan Bihul Rural Municipality-4 in Saptari district. Shantosh Bhandari, 13, son of Kisundev Bhandari of the Rural Municipality-4, Belhi, who had gone to deliver lunch to his brother working in the field, was swept away by the flood on Wednesday. The body of the boy was found near Balan River of Madhuwani district in Bihar.