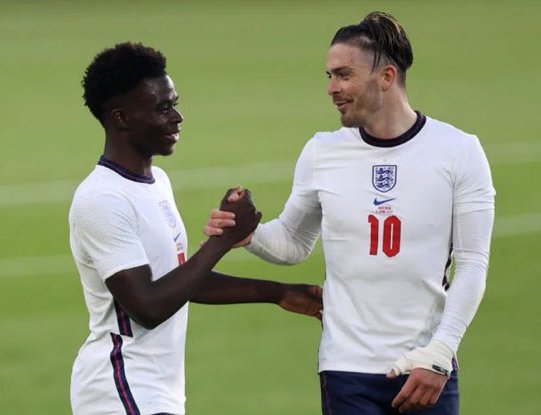 Jack Grealish and Bukayo Saka hadn't been given much of a chance to impress for England at Euro 2020 before Tuesday.

But Gareth Southgate handed both players starts against the Czech Republic in their Group D finale, and the duo made their impact felt.

Grealish directed much of the play in the middle and grabbed the assist for Raheem Sterling's first-half opener, while UEFA named Saka the Star of the Match as England defeated the Czechs 1-0 at Wembley.

Grealish had made one appearance off the bench in England's first two Euro 2020 matches, while Saka had not played at all.

But both players played a major part in England's opener, with Saka carrying the ball forward and beating his defender to find Grealish, who also beat his man and stood up an inviting ball to the back post for Sterling to head home.

"The manager told me to go out and express myself, to play how I have played for my club all season," Saka told ITV. "Sometimes that means driving at the opponents and I did that and got us up the pitch.

"It was a good cross from Jack for the goal and Raheem was in the right place at the right time again."

Sterling added: "Jack and Bukayo got in the pockets really well, turned and were positive. It is brilliant to have these players around you who can create goals.

"Different players are needed for different games and those two that came in were massive and did what they needed to do."

Some Arsenal fans on Twitter picked up on the duo's chemistry, urging the Gunners to buy Grealish from Aston Villa in a move that has been rumoured for some time.

Plenty of other observers simply pointed out the sheer class of the pair, who could be set to play a major role as England advanced to the round of 16.