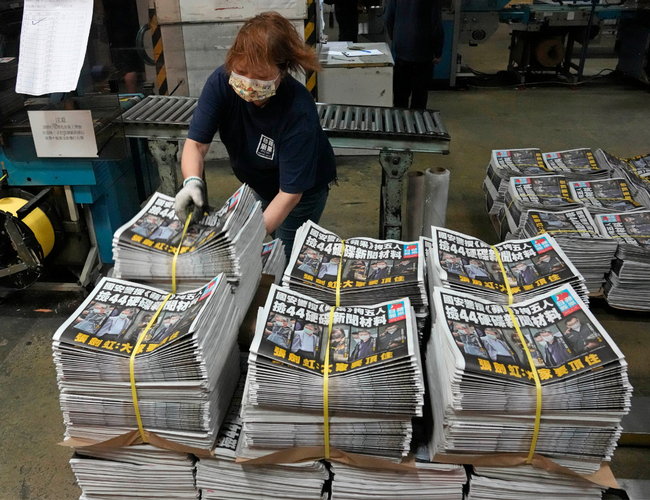 The paper was forced to stop publishing after some of its senior staff were arrested for alleged violation of the national security law for the region, and its assets were frozen.

Several hundred people gathered in front of Apple Daily's head office on Wednesday night to show their support for reporters putting out the final edition.

At a distributor in a downtown area, people formed a line several hundred meters long to buy the paper.

A woman said she was very sad. She said the newspaper that told the truth in Hong Kong had disappeared, and that she did not know what to read from now on.

A man said that since the national security law took effect, he cannot say what he used to be able to say. He said Thursday was the day when freedom of speech in Hong Kong ended.

Apple Daily said it published 1 million copies of the last edition. The number is about one-seventh of Hong Kong's population.

The newspaper harshly criticized the governments of China and Hong Kong, attracting support from many citizens.

But the closure of the paper that launched in 1995 means the freedom of speech guaranteed in the "one country, two systems" principle for the territory is greatly reduced.

Hong Kong's pro-democracy newspaper Apple Daily will end on Thursday due to lack of operating funds, after its assets were frozen for alleged violation of China's national security law for the territory.

Apple Daily said on Wednesday that even if it became able to issue newspapers, Thursday's morning edition would be its last in print. It also said its online edition will end by that day.

Apple Daily had been a symbol of freedom of speech guaranteed in Hong Kong after the territory was handed over to China from Britain in 1997.

Ukraine Says Its Forces Pulled Out Of Lisichansk By Agencies 11 hours, 46 minutes ago