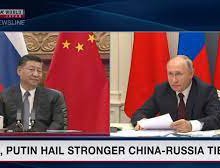 The presidents of China and Russia have agreed to oppose interference in others' internal affairs under the guise of democracy and human rights.

China said that President Xi Jinping and Russia's Vladimir Putin also expressed their opposition to unilateral sanctions at an online summit on Monday.

This came after the Group of Seven leaders issued a joint communique underscoring the importance of peace and stability across the Taiwan Strait. It also called on China to respect human rights and fundamental freedoms in relation to the Xinjiang Uygur Autonomous Region and Hong Kong.

The Chinese and Russian governments said their leaders formally agreed at the summit to extend a friendship and cooperation treaty between the two countries, which was signed two decades ago.

During his talks with Xi, Putin reportedly stressed that coordination between their countries plays a stabilizing role in world affairs amid increasing geopolitical turbulence.

Xi apparently hopes to strengthen relations with Russia, as the United States steps up cooperation with its allies under President Joe Biden's administration.