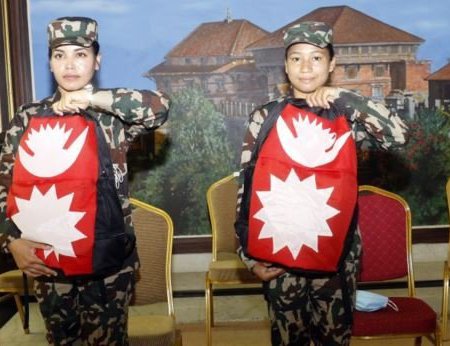 Five including four Nepali athletes will be participating in the 32nd Olympic Games-2021 to be held in Japan from coming July 23 to August 8.

Those players winning the opportunities for representing the nation in the mega sports event are Kalpana Pariyar (shooting), Saraswoti Chaudhary (athletics), Gaurika Singh, and Alex Jung Shah (swimming), and Sonia Bhatta (judo). All of them were selected for the Summer Olympics through a wild card in recongsition of their contribution to the respective sports.

Of them, Pariyar who is considered proficient in the 10-meter air rifle and Chaudhary, a national record holder in the 100-meter athletics, are the Nepal Army (NA) players.

The NA organised a programme at its headquarters today in honour of the players of its departmental team Tribhuvan Army Club who are selected for competing in the Olympic Games.

On the occasion, Chief of Army Staff Purna Chandra Thapa presented them with a bag containing sports gear, wishing for their success in the competition. Army Chief Thapa said that 24 athletes from the NA had so far able to perform their skills in the Olympics on the basis of NA’s continuous and remarkable contribution to the development of the country's sports sector.