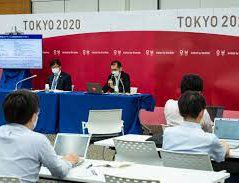 Olympic organizers say there will be no fans cheering on the world's top athletes when they compete in Tokyo-area venues. The Games will kick off in just two weeks. Reaction to the news of the spectator ban has been mixed -- both at home and abroad.

Just before the organizers made their decision, the Japanese government announced a fresh coronavirus state of emergency for the capital. It begins on Monday and runs throughout the Games.

The organizers decided not to allow spectators at events in Tokyo and the neighboring prefectures of Chiba, Saitama and Kanagawa.

But a limited number of fans will be allowed in four prefectures, including Fukushima.

Reporters asked the Tokyo governor on Thursday why the Games should be held at all, considering the pandemic.

Koike Yuriko responded, "People around the world have had differing opinions throughout the pandemic. I expect that the Olympics could be an opportunity to change the situation using the power of sports to encourage people."

Governor Kumagai Toshihito said he understood why the move is necessary. He said, "As a host prefecture, we'll make our best efforts to gain public support by taking thorough preventive measures."

Many Japanese athletes had hoped to draw on the excitement of a crowded stadium but say they know fans will be cheering from home.

Badminton player Momota Kento says, "I am not in a position to comment on the decision, but I'll do all I can to live up to the responsibilities that were entrusted to me."

Athletes outside Japan are also digesting the news. One Australian tennis star has decided to pull out. Nicholas Kyrgios wrote to fans, saying "the thought of playing in front of empty stadiums just doesn't sit right with me."

Tickets were hard to come by. Fukumoto Reiko is among the fans who were lucky enough to secure some for the women's soccer final. Now she won't get the chance to use them. Fukumoto expressed her disappointment, saying, "No one did anything wrong. All I can do is feel really sorry about the situation."

Meanwhile, the torch relay has started in Tokyo. But the Olympic flame will not travel on most of the routes. Runners participating in the ceremonial event are lighting the flame without spectators.