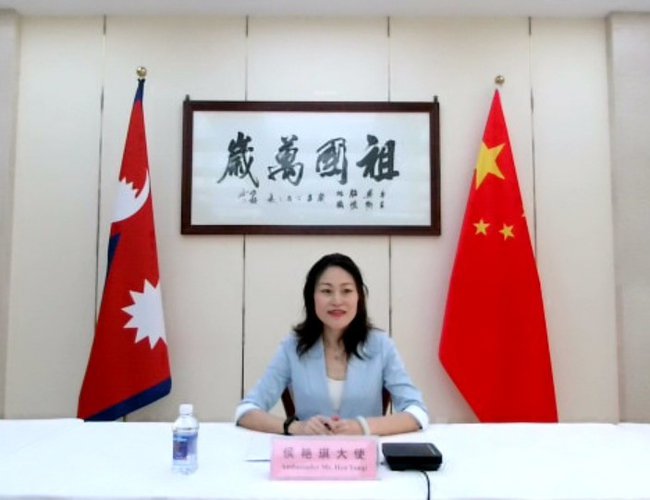 Chinese ambassador to Nepal Hou Yanqi has said that China would supply more COVID-19 vaccines to Nepal as needed. She said so while addressing a press meet held virtually this morning.

She said that China has supplied vaccines to over a hundred countries including Nepal and as China's vaccine production capacity has also increased, it would supply more vaccines to Nepal as needed.

Responding to a query about the non-disclosure purchase process between Nepal and China's company, the Chinese ambassador said the process that was adopted was as per international practice.

Talking about the Belt and Road Initiative (BRI), ambassador Hou viewed that Nepal is an important partner in the BRI and expressed her expectation that many more projects would be implemented in the future under the BRI.

She also mentioned the completion of the reconstruction of Durbar High School in Kathmandu, near completion of the Pokhara regional airport and Gautam Buddha Airport, among others, as examples of BRI projects in Nepal.

When asked about the difficulties in the export of Nepali products to China through Kerung and Tatopai border points, the Chinese ambassador attributed the problem to the restrictions enforced to curb the spread of the COVID-19 pandemic and hoped that the concerned authorities in the borders will take necessary measures to ease the export and import of goods.