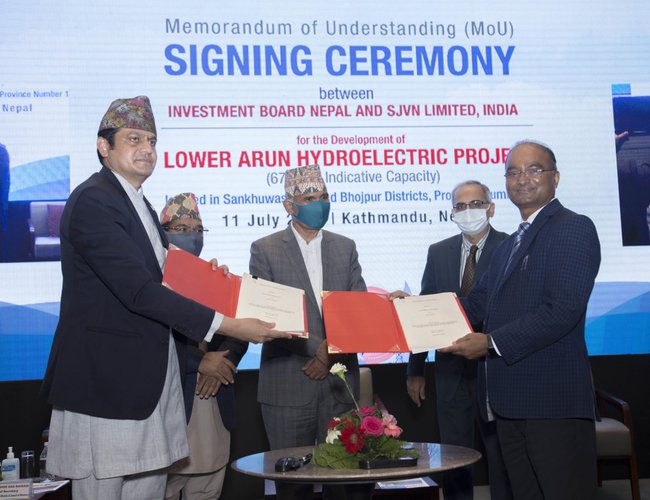 The Investment Board Nepal (IBN) and India's state-owned SJVN Ltd signed an agreement to develop the 679-megawatt Lower Arun Hydroelectric Project in the country. A memorandum of understanding (MoU) was signed by IBN Chief Executive Officer Sushil Bhatta and SJVNL Managing Director Nand Lal Sharma on behalf of their respective organisations.

Bhatta said signing of the MoU for Lower Arun HEP marked a new milestone in the bilateral ties between Nepal and India and expressed belief that green projects could aid in significantly reducing the carbon emissions that have been making the headlines for causing climate change.

The peaking run-of-the-river project will be implemented as per build, own, operate, transfer model.The company will conduct a detailed project study and submit the detailed project report to the IBN within two years of the MoU signing date.

The entire cost of the study will be borne by the company, which will also have to submit monthly progress report to the IBN.Estimated to cost $1,300 million (as per the exchange rate of 2017), the project that is scheduled to be completed in four years after commencement of construction activities and is expected to generate 2,625 gigawatt hours of electricity annually.

SJVN started its journey in Nepal in 2008 by signing of the pact for implementation of 900MW Arun-III Project. The project construction activities commenced with laying of the foundation stone jointly by Prime Minister K P Sharma Oli and his Indian counterpart PM Narendra Modi in 2018.It has been reported that Arun III Hydroelectric Project has achieved significant progress in the past three years despite the COVID-19 pandemic, as construction activities of the project are going on in full swing.

IFC Appointed Riccardo Puliti As Its New Regional Vice President For Asia And The Pacific By NEW SPOTLIGHT ONLINE 3 days, 7 hours ago

Finance Ministry Cut The Budget Of Purchasing Newspapers And Printing Under its Austerity Measures By Agencies 3 days, 19 hours ago