ISRAEL SUPPORT From A Friend Indeed

Providing 58 ventilators, Israel has shown how it has accorded high priority to Nepal 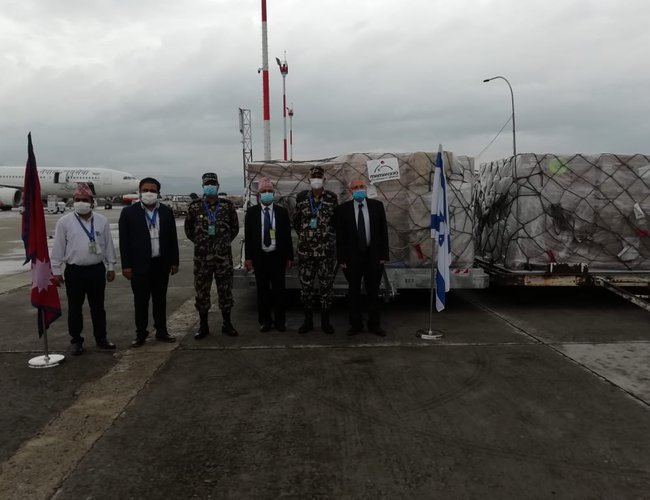 As it is said a friend in need is a friend indeed. Since the establishment of bilateral relations, the State of Israel has been showing its support and backing to Nepal at times of crisis.

From economic to humanitarian fronts, Israel’s support to Nepal has been immense. Under learn and earn program, Israel has been supporting 500 Nepali students, inviting them to learn about hi-tech agriculture and earn money. Selected through Sanakisan Bittiya Sanstha Limited, over 4000 Nepalese young students have already benefited from this 10-month long program.

Similarly, Israel has also been providing humanitarian support whenever Nepal is in desperate needs. Just after a major earthquake which rocked Nepal in 2015, Israel had sent a special aircraft with a makeshift hospital to treat the victims of the earthquake.

After experiencing a shortage of ventilators, the government had requested various donor agencies to provide ventilators when the daily infection rate of COVID-19 was at a peak during the second wave.

“The Government of Nepal expresses its gratitude to the Government and friendly people of the State of Israel as well as the Nepali community in Israel for their generous support of essential medical items to Nepal at this time of need,” said a statement issued by Ministry of Foreign Affairs.

A special flight of Nepal Airlines brought from Israel a consignment of medical support consisting of medical equipment and supplies including ventilators, oxygen concentrators, masks, PPEs and coverall, provided by the Government and people of the State of Israel as well as the Nepali community living in Israel to support the ongoing fight against COVID-19 in Nepal.

The consignment was received by the representative of the Ministry of Health and Population at the airport. Hanan Goder, Ambassador of Israel to Nepal, and Harishchandra Ghimire, Joint Secretary of Ministry of Foreign Affairs, were also present on the occasion.

According to the MoHP, 200 ventilators were donated to the nation by various agencies during the pandemic. Of them, 46 were donated by Germany, 40 by the Embassy of Switzerland, 20 by T-Pride PTE Limited, 15 by the Spanish government, 14 by France, five by Tibet of China, and one set each by Standard Chartered Bank and One Heart World-Wide.

“Apart from 180 ventilators to be procured this year, currently there are 1,233 ventilator sets in Nepal including those received as donations,” the MoHP informed.

“The ministry is working round the clock to control the spread of the virus and overcome unavailability of hospital beds, ICUs and ventilators for the treatment of infected patients,” said Dr. Krishna Prasad Poudel, spokesperson at the Ministry of Health and Population (MoHP).

“Thus, preparations are being made to frame a directive to strengthen managerial and supply side of ventilators and human resources.”

According to Dr. Poudel, the ventilators available at district hospitals were not used due to the absence of competent technicians. “Thus, we are making efforts to frame plans to employ health professionals in the respective hospitals to ensure operation of those ventilators,” said Dr. Poudel.

Following the increase in COVID-19 cases after the relaxation of prohibitory order in various districts across the nation, the government is working in full swing to ensure availability of ventilators.

Dr. Poudel, spokesperson at the Ministry of Health and Population (MoHP), said, “As the demand for ventilators has increased from the past few days, the ministry has managed area-based supply of ventilators and increased human resources to facilitate easy operation of the ventilators.”

“Prior to this, even though ventilators were available in a few hospitals, they could not come into operation due to the lack of human resources,” he added.

According to Dr. Poudel, currently there are 1,233 ventilators nationwide. The government had added 600 ventilators last year itself.

“Considering that the number of ventilators they might not be enough for the treatment of COVID-19 patients if the cases spike again, the MoHP is underway to procure 180 more ventilators,” informed Dr. Poudel.

He added that the ministry was working by its entire means to provide quality treatment to the virus-infected patients in time.

“Currently, we are collecting data from hospitals across the nation to distribute the ventilators accordingly,” he added.

According to the MoHP, Gandaki Province has 542 sets of ventilators, which is the highest of all provinces. There are a total of 201 ventilators in government, community, private hospitals, and medical colleges.

As informed by the Health Ministry, there are 31 ventilators in TU Teaching Hospital, 20 in Nepal Police Hospital, 25 in Kathmandu Medical College, 22 in Sukraraj Tropical and Infectious Disease Hospital; nine in Armed Police Force (APF) Hospital, eight in Birendra Sainik Hospital, 10 in Bir Hospital, 12 in Manmohan Hospital and eight are in Dhulikhel Hospital.

With the arrival of more ventilators from Israel, more Nepalese in need of ventilators will receive the service. Israel has shown that a friend in need is a friend indeed.