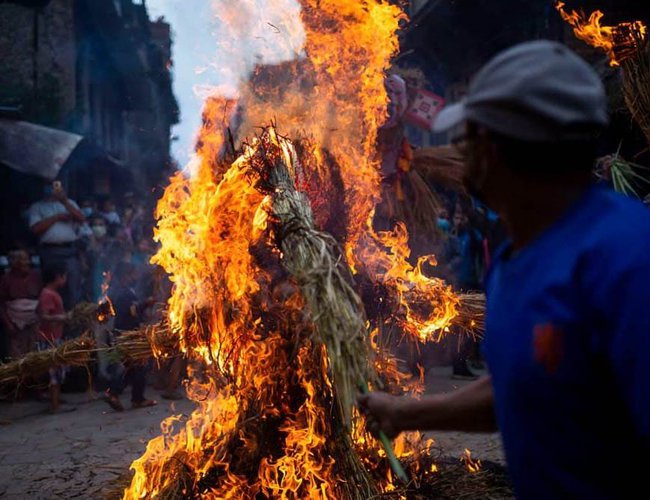 In a traditional manner, the residence of Kathmandu Valley observed Gathemuncal or Ghantakarna festival today.

There is a myth that a legendary demon named “Ghantakarna” was existed and spread negativity and cruelness among the people. To get rid of this, Newars prepared dummies demons and are erected at the crossroads. The Ghantakarna is made up of straws, bamboo leaves for body parts, while the face is made of nanglo (a bamboo round plate-like used in Nepali kitchens for sifting rice) with art placed to it and bells, are used to signify ears. It is taken around the city and at the end of the day, it is dragged to the nearby river bank for disposal and burn at the chowks of the city. 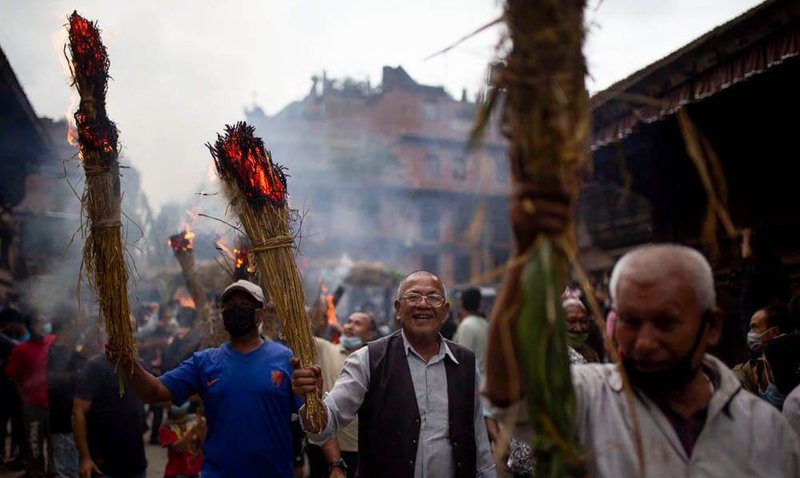 Numerous legends are associated with this festival. Nobody knows the exact evolution of this culture but many said that it was celebrated since the Lichhavi era. According to beliefs, Ghantakarna with a pair of bells on his ears used to terrify people by killing them. That was the reason people called Ghanta (Bell) and Karna (Ears). People tried killing them by deceiving but couldn’t get success. Later, a clever frog was successful enough to kill him in a swamp when he was on his way to hunting. This particular day was believed to mark the celebration of the Ghantakarna Festival.

On this day, people also wear iron rings on their fingers in the belief of protecting them from evil spirits and demons. The iron rings are originally made by the Nakarmis (Newars who traditionally work to make iron equipment). The ring has faith in protecting people from unpleasant and evil spirits. People on this day get back home early and at night, they hammered the three-legged nails on the doors to get away from the ghosts to house.

At home, people clean their houses and prepared Samaybaji (a food mixture of beaten rice, ginger, black soybeans, chhoila, potato, garlic). They stick a small patch of cow’s dung with different plants in the doors to purify their house. They also burn wheat hay in every nook and corner of the house to take away misfortunes.